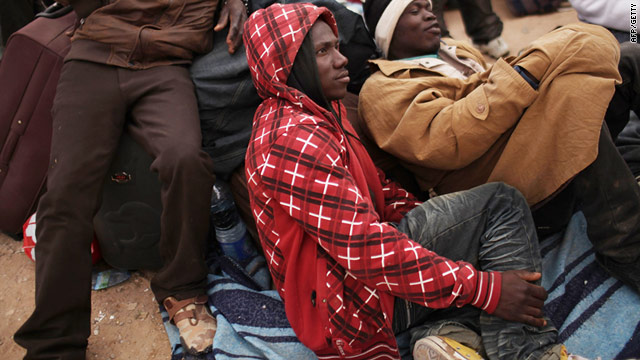 Migrants at a camp in Tunisia having crossed from Libya -- there are reports of violence against sub-Saharan Africans in Libya.
STORY HIGHLIGHTS
RELATED TOPICS

(CNN) -- The United Nations refugee agency reported disturbing accounts of violence and persecution of sub-Saharan Africans within Libya Tuesday, urging a recognition of their particular vulnerability in the midst of civil war.

A group of Sudanese who arrived in Egypt from eastern Libya told representatives of the United Nations High Commissioner for Refugees (UNHCR) that armed Libyans were going to door to door, forcing people from sub-Saharan countries to leave.

They also reported the rape of a 12-year-old Sudanese girl and said many of their documents had been confiscated or destroyed.

Spokesman Adrian Edwards said the agency was alarmed by such accounts, increasing in number as the situation in Libya intensifies.

Sub-Saharan Africans came under attack after reports that strongman Moammar Gadhafi had recruited them to serve as mercenaries.

Libya's war has forced out 215,000 people, many of them poor migrant workers who have been stranded at both the Tunisian and Egyptian borders.

The refugee agency has been working with the International Organization of Migration (IOM) to evacuate people, many of whom have been spending cold nights under the stars and with very little to eat. Others have been sheltered in cramped, unsanitary conditions.

The IOM said it was accelerating repatriation of Bangladeshis, who remain stranded by the thousands on both borders with Libya. The agency said it will need at least 20 more chartered flights to evacuate Bangladeshis remaining on the Egyptian border alone.

A Bangladeshi man died over the weekend after a fight over food distribution at the Egyptian border, the UNHCR staff reported. They said many of the 3,500 Bangladeshis at that border have been waiting for up to 10 days for transportation and are becoming increasingly agitated.

Fewer people are crossing over from Libya into Tunisia, a drop the UNHCR said coincided with intensified fighting in western Libya. Those fleeing have described risky travel conditions and numerous roadblocks.

As the fighting escalates in Libya, many are in dire need of help just to survive, U.N. agencies said.

The U.N. World Food Programme said a convoy of its trucks was able to enter eastern Libya and was due to arrive in Benghazi some time Tuesday.

The convoy, carrying high-energy date bars, was part of a $39.2 million emergency operation intended to provide food to more than one million people in Libya, Egypt and Tunisia over a three-month period.