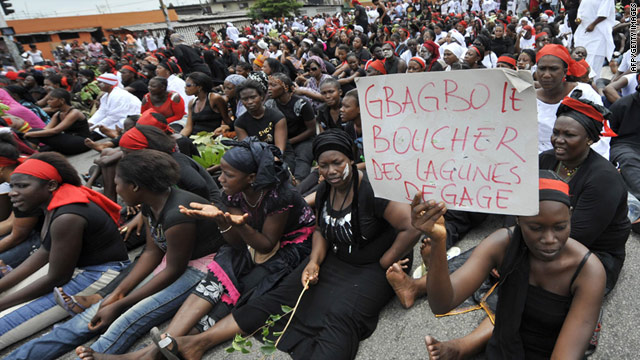 Abidjan, Ivory Coast (CNN) -- In cities across the world, women marked the centennial International Women's Day. In Ivory Coast, the day took on poignancy for women who dared to take to blood-stained streets where seven of their own were shot down a few days before.

Unafraid they might meet the same fate, the women who marched in the Abobo suburb of the city of Abidjan Tuesday wanted the world to take note of a brazen and chilling act that underscored the violence that has plagued Ivory Coast since a disputed presidential election in November.

A video posted online documented in graphic detail the transformation of a peaceful demonstration last Thursday into grisly killings by what appeared to be forces loyal to Laurent Gbagbo, the self-declared president of Ivory Coast.

Without any apparent warning, a volley of three bursts from a heavy-caliber gun could be heard in the video, followed by screams as the marchers, including whoever is holding the camera, ran from the street, leaving behind a pavement littered with flip-flops, clothing, tote bags -- and rivers of crimson.

Gbagbo denied his forces were behind the killings and instead charged a "gross manipulation" of events. State television aired another video, which also appeared to be shot in Abobo, of armed protesters, and suggested that challenger Alassane Ouattara's supporters were responsible for the deaths.

The international community recognizes Ouattara as the legitimate president but Gbagbo refuses to cede power. The political stalemate has resulted in months of uncertainty and spiraling violence. Human rights groups have warned the West African nation is sliding back into a bloody civil war.

On International Women's Day Tuesday, women marched in three neighborhoods in Abidjan -- Abobo, Treichville and Koumassi -- to protest the bloodshed.

The Treichville march was especially tense. Women marched surrounded by male Ouattara supporters who surrounded them for protection.

Military and police forces patrolled the area and the air filled with the sound of gunfire and the smell of burning tires.

It was unclear if anyone had been killed or injured in the marches.