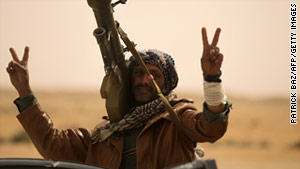 Benghazi, Libya (CNN) -- Rebels appeared Monday to have slowed the eastward advance of Libyan government forces toward Benghazi at the town of al-Brega.

But it was not clear late in the day who controlled al-Brega, which contains a large oil refinery and natural gas plant, said CNN's Ben Wedeman, reporting from Benghazi, which is about two hours away. Meanwhile, government planes carried out air raids 40 minutes from al-Brega, in the town of Ajdabiya.

CNN was not able to reach the front lines Monday.

For the first time since violence erupted last month, forces opposed to Libyan leader Moammar Gadhafi did not allow members of the news media to go forward. They expressed concern that coverage from the rebel side of the lines could provide intelligence to government forces about the ragtag rebel forces' tactics, or lack thereof.

Life in Benghazi appeared calm on the surface: stores were open and people went about their business. But some residents expressed an underlying fear that Gadhafi appeared to have gained the upper hand and was advancing his military forward as much of the rest of the world focused on the catastrophe in Japan.

Some expressed fear that Gadhafi may seek to block roads leading to Benghazi and other coastal cities, then lay siege to them. Some worried that, if Gadhafi reasserts control of those cities in eastern Libya that led the revolt against his rule, he might carry out bloody reprisals.

Forces loyal to Gadhafi have been fighting to recapture towns from the rebels since the uprising began last month.

En route to Washington after a weekend trip to Bahrain, Defense Secretary Robert Gates told reporters Monday that the logistical challenges of enforcing a no-fly zone over Libya could be overcome. "If we are directed to impose a no-fly zone, we have the resources to do it," he said. "The question is whether it's a wise thing to do. And that's the discussion that's going at a political level."

The Arab League voted Saturday to back a no-fly zone to protect the civilian population.

The Libyan foreign ministry has denounced the league's move, calling it a "flagrant action against its charter," according to state TV Sunday. It also reported that the ministry would welcome the arrival of a fact-finding mission sent by some African nations.

The White House has cheered the league's announcements and stressed it will continue to pressure Gadhafi, support the opposition and prepare for "all contingencies."

Foreign ministers attending a G8 summit in Paris Monday also welcomed the Arab League statement, but wanted further clarification of what it meant. The statement calls for support of the no-fly zone but voices opposition to foreign intervention.

The ministers at the G8 summit discussed other options such as calling for the United Nations Security Council to impose additional sanctions against Libya and establishing "safety zones" in areas threatened by bombardment.

The ministers spoke with a sense of urgency about how to respond to the humanitarian and political crisis in Libya.

Also, the U.N. special envoy to Libya, Abdul Ilah Al-Khatib, arrived in Tripoli on Monday, "the first day of a visit aimed at helping to stop hostilities in the North African nation and ensuring that civilians are protected," according to U.N. spokeswoman Anne Siddall.

Al-Khatib met with Libyan Foreign Minister Moussa Koussa, reiterating international calls for an end to the violence. Al-Khatib was assured by senior Libyan government officials that they "would fully cooperate with the Commission of Inquiry recently authorized by the U.N. Security Council," Siddall said.

Before his visit, Al-Khatib met Friday with U.N. Secretary-General Ban Ki-moon. In a statement released by his spokesman, the secretary-general said his message on Libya "has been strong and consistent. The violence must stop. Humanitarian aid must get to those in need. Those responsible for violence against civilians will be held accountable. A peaceful resolution must be found."