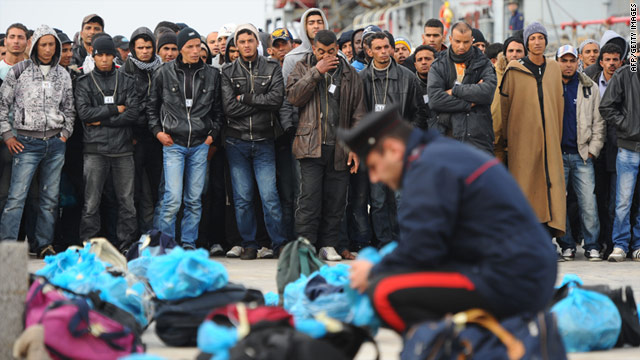 Tunis, Tunisia (CNN) -- Italy's coast guard says at least 1,623 migrants have landed on the tiny island of Lampedusa over a 24-hour period.

According to a coast guard statement released Tuesday, at least seven boats believed to have taken off from Tunisia landed on the Italian island with more than 400 passengers. The rest of the people were rescued at sea by Italian maritime patrols.

Sailors at the Tunisian fishing port of Zarzis said they have seen a spike in the number of boats full of migrants departing on the dangerous 16- to 24-hour journey to Lampedusa, about 100 kilometers (62 miles, or 54 nautical miles) away.

"Yesterday, seven boats left here for Lampedusa," Faisal Jebnoun said Monday as he pulled seaweed and other debris from his net after a long day fishing for squid.

"The youth are crazy," Jebnoun added. "They all think they'll find a better life in Italy, and they don't even speak Italian!"

Italy has seen a surge in migrants from Tunisia since the North African country experienced a revolution in January that threw longtime President Zine El Abidine Ben Ali from power.

Lampedusa is often a favored target since it is one of the southernmost European points in the Mediterranean Sea.

At one point, said Souei Abdesslem, president of the Blue-fish Union in Zarzis, so many young Tunisians were anxious to smuggle themselves to Europe that fishermen began sleeping in their boats to prevent them from being stolen for the hazardous passage across the Mediterranean.

The Italian coast guard reported that it had rescued five passengers Sunday night who said their boat sank, with 35 other passengers still missing.

Dozens of passengers from a Tunisian boat are believed to have died in January after it collided with a Tunisian coast guard vessel on a similar journey.

Coast guard spokesman Cosimo Nicastro said he expects that the recent surge of migrants will decrease because of forecasts of stormy weather in the days ahead.