From Erick Kaglan, For CNN 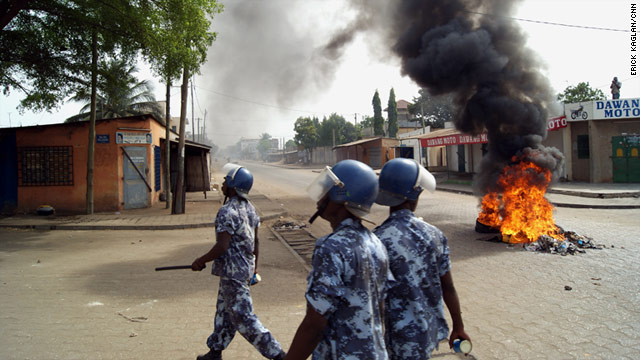 Demonstrations were held in Lome, Togo, on Thursday against the government's efforts to regulate protest marches.
STORY HIGHLIGHTS

"Enough is enough. They should not trample with our constitutional rights," shouted an angry supporter of Jean-Pierre Fabre's National Alliance for Change party, which had called for the demonstration.

"This time, we are prepared to die if (President) Faure Gnassingbe does not step aside!" warned another.

As the clashes continued in opposition strongholds, angry militants began to set tires ablaze along some of the streets in the capital while security forces engaged them in running street battles.

Eric Dupuy, press secretary for the ANC, claimed that several militants were injured and some have been arrested, including Robert Olympio and Alexandre Amorin, both members of the executive bureau of the party.

He condemned the "high-handedness" of the security forces.

"What we have seen today is the manifestation of the determination of the Togo government to suppress all peaceful protests in Togo," he charged. "But we are not deterred and we are prepared to go ahead."

Col. Yark Damehane, commander of the National Gendarmerie in charge of the security forces, said Thursday's demonstrations were "unauthorized and therefore, illegal."

The new measure on public protests, yet to be submitted to parliament, has triggered a fierce war of words between the government and the ANC.

While the Togolese government is seeking to replace the laws regulating protests introduced by the French colonial administration in 1946, the ANC claims the government's plan amounts to a new political maneuver to stifle the constitutional rights of the Togolese people to hold free, unfettered public demonstrations.

"The Togo government is afraid of a spillover effect of the wind of change blowing from the north of Africa if public demos are not curbed," Fabre said last week. His supporters have rallied in the capital every Saturday since he lost to Gnassingbe in the March 2010 election, claiming that he's the legitimate winner and denouncing the president.

Fabre asked for the "unconditional withdrawal" of the proposed measures.

Togolese Interior Minister Pascal Bodjona last week denied that the proposed legislation on public protests is an effort to prevent upheavals similar to those now taking place in other African nations.