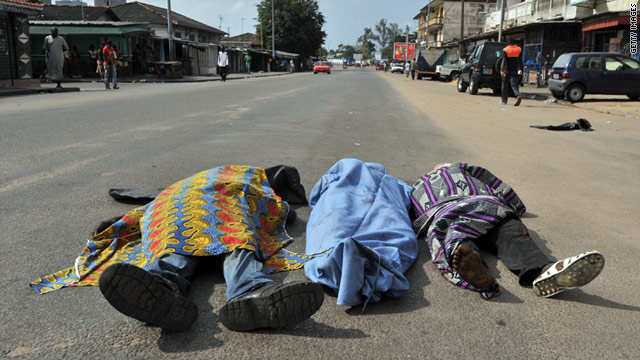 The bodies of three people killed in a street of the popular Abidjan district of Adjame as civil unrest rages on Friday.
STORY HIGHLIGHTS
RELATED TOPICS

(CNN) -- At least 25 people were killed in what the United Nations called Friday a shocking escalation of violence in Ivory Coast, wracked by an electoral crisis that many fear is sliding toward another civil war.

Doctors Without Borders treated 66 people with gunshot wounds and injuries caused by shell explosions in the wake of the attacks, according to a news release from the medical aid group. Women and children were among those injured, the statement said.

The international community has widely recognized Gbagbo's challenger, Alassane Ouattara, as the winner of a November election and the legitimate leader of the west African nation. But Gbagbo has refused to cede power, with the stalemate resulting in uncertainty and bloodshed.

The United Nations refugee agency reported heavy shelling in the Abobo neighborhood of Abidjan was responsible for the deaths. Many more were injured.

U.N. Secretary General Ban Ki-Moon condemned the shelling and urged the U.N. Security Council to take "further measures" against those found responsible for the violence. He said the U.N. would "continue to take the necessary steps to protect the civilian population."

A statement from Amnesty International provided more details about the violence Thursday. Mortar shells fell on a market, the rights group said, describing it as one of the most serious incidents in the city since the current crisis erupted.

"This afternoon, before one o'clock prayers, women were selling their goods in the market ... in Abobo," an eyewitness told an Amnesty International researcher. "Everything was quiet when suddenly we heard an awful sound and a shell hit the ground. At least 10 people, mainly women, were killed and others wounded."

Another eyewitness told the group's researcher that the attacks came just after prayers. "A woman ... came in with her baby," according to the news release. "She was hit by a shell and died in the hospital a few hours afterwards. Her baby was wounded. Another 16 month-year-old baby was killed by the same shell."

Earlier in the week, attacks were reported in other parts of Abidjan, the commercial center of Ivory Coast, said a spokesman for the United Nations High Commissioner for Refugees.

"We are shocked at the escalating violence in (Ivory Coast), particularly in Abidjan, where this week was by far the most violent since the post-election crisis began," the agency spokesman said at a briefing Friday.

A community radio station was also attacked and set on fire in the neighborhood of Adjame, and sporadic gunfire was heard in several districts of Yopougon, where heavy fighting took place Monday.

The intensifying urban warfare has displaced hundreds of thousands of people attempting to flee to safer ground. About 75,000 have crossed borders, most into Liberia, according to the U.S. State Department. But thousands of others are out of their homes within Ivory Coast.

Humanitarian agencies have reported hampered aid distribution due to security concerns and harassment.

Human Rights Watch has blamed the violence on Gbagbo's security forces and said their actions give "every indication of amounting to crimes against humanity."