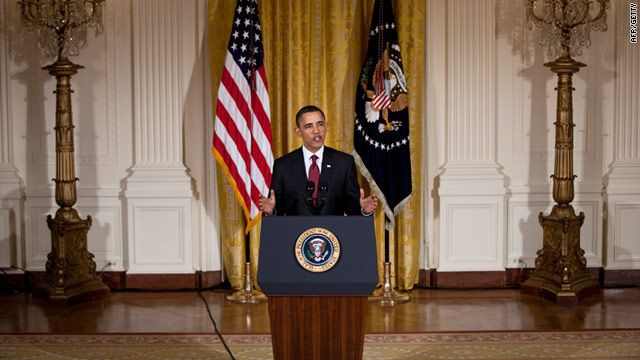 President Obama said the U.S. military would act only in concert with its international partners, including European countries.
STORY HIGHLIGHTS
RELATED TOPICS

A cease-fire must be implemented immediately. and government troops must be pulled back from the cities of Ajdabiya, Misrata and Zawiya, Obama declared at the White House. Electricity, water and gas must be restored to all parts of the country, he said, and international humanitarian assistance must also be allowed.

"These terms are not negotiable," Obama declared. If Gadhafi fails to comply, "the international community will impose consequences."

Obama's announcement came one day after the U.N. Security Council authorized the use of force to protect Libya's besieged civilian opponents of the regime. The president said his demands were necessitated by the need for regional stability and the unrelenting bloodshed on the part of Gadhafi's forces.

"Left unchecked, we have every reason to believe Gadhafi (will) commit atrocities against his own people" and destabilize North Africa and the broader Middle East, Obama said.

"The democratic values that we stand for would be overrun," and the "words of the international community would be rendered hollow," he asserted.

Conflict was still raging in Libya on Friday, witnesses said, despite the Gadhafi government's announcement of an "immediate" cease-fire in response to the Security Council resolution.

Libya's deputy foreign minister called for observers from China, Malta, Turkey and Germany "to come to Libya as soon as possible ... to make sure that there is a real cease-fire on the ground."

The U.S. president made clear that the American military would act only in concert with its international partners, including several European countries and representatives of the Arab League.

He also insisted that American troops would not be deployed in Libya.

The United States "will provide the unique capabilities that we can bring to bear ... including enabling our European allies and Arab partners to effectively enforce a no-fly zone," Obama said.

America is "not going to use force to go beyond a well-defined goal," he insisted. "Specifically, the protection of civilians in Libya."

The U.N. resolution, while not authorizing such a move, does not preclude the United States from arming rebels, the U.S. ambassador to the United Nations said Friday.

Ambassador Susan Rice told CNN's "Situation Room" that the "U.S. is ready to act" and that Gadhafi "should be under no illusions that if he doesn't act immediately he will face swift and sure consequences, including military action."

Obama was one of several world leaders to clarify their military intentions and limitations on Friday.

To the north, Canadian Prime Minister Stephen Harper said his country is sending CF-18 fighter jets to join a Canadian warship on standby off the coast of Libya.

Across the Atlantic, French government spokesman Francois Baroin said France plans to participate in "swift" efforts against the Gadhafi regime. President Nicolas Sarkozy will convene a summit Saturday to examine the crisis. Members of the Arab League, the president of the European Council and representatives of states supporting implementation of the U.N. resolution have all been invited.

British Prime Minister David Cameron said the United Kingdom has started preparations to deploy aircraft, and "in the coming hours" they will move to air bases where they will be positioned for any "necessary action."

Spain will offer NATO the use of two military bases and provide air and naval forces for use in operations involving Libya, Spanish Defense Minister Carme Chacon said Friday in Madrid.

The two bases to be offered in southern Spain are the Rota air and naval station, where a contingent of U.S. troops is also based, and the air base at Moron de la Frontera. Those, as well as the offer to provide air and naval assets, would be subject to parliamentary approval, the minister said at an event at a Spanish air base in Madrid, a spokesman said.

Germany, which abstained from Thursday's U.N. Security Council vote, decided that its country's troops will not be used in any military action, according to Foreign Minister Guido Westerwelle. But "we believe that those who voted for military intervention have good motives," Westerwelle said.

Norway "must determine what resources NATO needs ... and what (my country) can contribute," Norwegian Defence Minister Grete Faremo said.

Italian Foreign Minister Franco Frattini said his country was closing its embassy in Tripoli and will actively participate in the effort. The country's defense minister, Ignazio La Russa, said his government will ask the Italian parliament for permission to deploy military personnel and aircraft.

Denmark and Belgium agreed to commit F-16 fighter jets, according to Reuters and AFP.