No-fly zone could be canceled if Libya pulls back forces 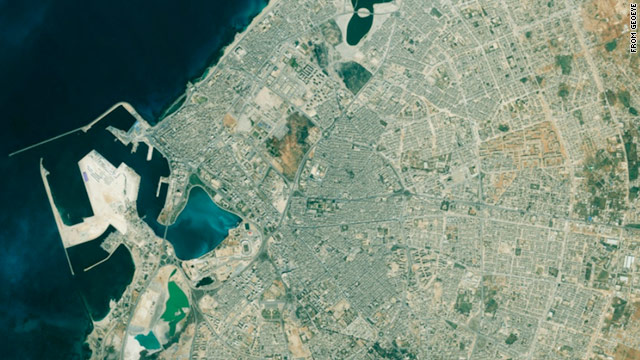 This is a recent satellite image of Benghazi in eastern Libya. The nation's second-largest city, it is held by rebels.
STORY HIGHLIGHTS

Washington (CNN) -- Even as Secretary of State Hillary Clinton said the ultimate goal for the U.S. was to see Libya's president cede power, a senior administration official says the U.N.-mandated no-fly zone and military action to support it would not necessarily last until Libyan leader Moammar Gadhafi steps down.

This official, who spoke on background because of the diplomatic sensitivity of the issue, said that "right now, we're focused on stopping the violence."

Clinton said Friday, "The first and overwhelming urgent action is to end the violence. And we have to see a clear set of decisions that are operationalized on the ground by Gadhafi's forces to move physically a significant distance away from the east, where they have been pursuing their campaign against the opposition."

The purpose of the no-fly zone, the administration official said, is to prevent Gadhafi from attacking his own people.

No-fly zones: Do they work?

"There are a lot of different measures," the official said. "If you have a cease-fire in place that is verifiable, then you can continue turning the noose without taking necessarily further action. What we're trying to do is freeze his advance. And then work from there to what was the original call, which was that he has lost legitimacy and he needs to go. But you have to sequence it."

The official conceded that there are many scenarios that could unfold: Gadhafi could remove his forces, or he could temporarily cease attacking, only to later resume fighting. A standoff could ensue. "That is exactly the crux of the matter. No one can define that."

But, this official says, the administration's main approach now is: "Keep the international community focused on this, and the result will be that he leaves, but that may take some time."

A top State Department official raised the concern that Gadhafi could return to underwriting terror plots.

"I think there is also a very real danger that if Gadhafi is successful on the ground, that you will also face a number of other considerable risks as well," Undersecretary Nicholas Burns said Thursday. "The danger of him returning to terrorism, and violent extremism himself, the dangers of the turmoil that he could help create at a critical moment elsewhere in the region."

But a second U.S. official said the intelligence community has been assessing the Libyan leader's capabilities and intentions.

There is no indication that Gadhafi will respond with a terrorist attack; he is "distracted by events in his country," but the official said "no one is discounting his brutality."

The official said it is unlikely Gadhafi could orchestra a "sophisticated plot" such as the Pan Am Flight 103 or Berlin disco bombings, but there is always the possibility of smaller-scale attacks.

The Michigan Republican said there was a consensus against putting American troops on Libyan soil.

"I think that is a terrible idea. It would be a terrible option," said Rogers, who supports the no-fly zone. "I can't foresee a circumstance that would require U.S. soldiers on the ground in Libya."

Rogers said that protecting civilians and chemical weapon stockpiles are the top priorities.

"This buffer zone is incredibly important to protect those people and other Libyans who have stood up to Gadhafi and said 'no more, we want freedom and self-rule,' " the congressman said.

CNN's Pam Benson and Ted Barrett contributed to this report.