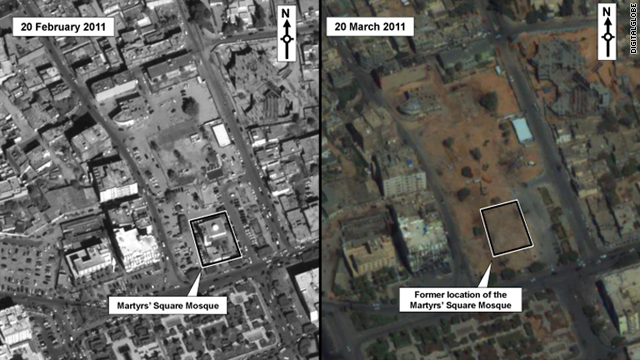 The images, taken in February and March, appear to show the destruction of a mosque in Zawiya, Libya.
STORY HIGHLIGHTS

(CNN) -- Satellite images of a Libyan city, provided to CNN by an intelligence source, appear to show evidence that pro-Gadhafi forces razed a mosque that recently served as a rebel command center.

The two images of an area of Zawiya, west of Tripoli, were taken February 20 and March 20, according to the source, who provided them on condition of anonymity.

In the first picture, a mosque can clearly be seen just south of Zawiya's Martyrs' Square, but in the later picture, the mosque is gone.

The images, the source said, were released as part of the international effort to build pressure on Gadhafi and to illustrate what coalition members say are crimes against his own people.

What are U.S. expectations for Libya?

CNN could not verify the authenticity of the images, nor when they were taken.

The images were provided to CNN at a time when there is some wavering of support from within the Arab League for the coalition military effort. The image of a mosque that may have been destroyed by Gadhafi loyalists may provoke angst in the Arab and Muslim world.

A CNN team that was in Zawiya both before and after government forces retook the city confirmed the mosque served as a makeshift clinic as well as a rallying point and command center for the resistance.

The mosque was badly damaged during fighting to retake the city, the CNN team reported.

CNN's Tommy Evans and John King contributed to this report.