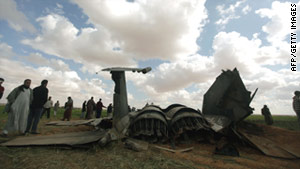 Washington (CNN) -- After the rescue of a pilot and the weapons systems officer in Operation Odyssey Dawn, the military is keeping the names of the two crew members under wraps.

The initial press release about the crash of a U.S. Air Force F-15 in eastern Libya said both members of the air crew ejected from the jet before it crashed. Later reports said they suffered minor injuries in the ejection.

The press release also made clear that "the identities will be released after the next of kin have been notified."

But after repeated requests from CNN for details about their identities and whereabouts, Maj. Beverly Mock, a spokesperson for the Joint Task Force Odyssey Dawn, wrote in an email: "We will not release the names of the aircrew. I realize initially it was said they would be released but because they are being reintegrated and will return to their unit we will not release their names for their safety and privacy."

As for their whereabouts, the U.S. Marine Corps reported the pilot was brought aboard the USS Kearsarge and that he was in the medical facility on the ship.

CNN has learned from military officials that the weapons specialist was brought to Europe, although nobody would say where.

Press officers were less helpful. Mock wrote: "We don't have information on where the aircrew are."