Gadhafi's aides in touch with U.S. but unclear on intentions 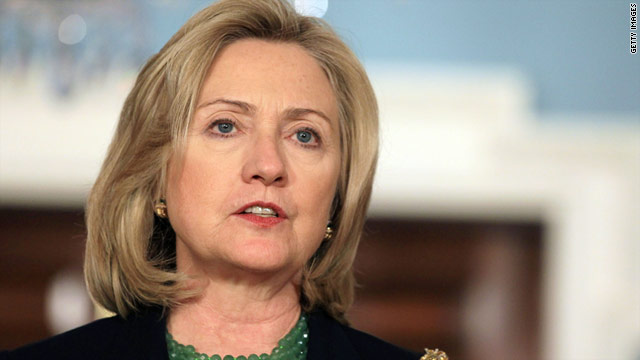 Washington (CNN) -- Members of Moammar Gadhafi's inner circle are contacting other Arab states and the United States, but have been unclear about their intentions, senior U.S. officials said.

In an interview on Tuesday, Secretary of State Hillary Clinton raised the prospect that Gadhafi and his inner circle were exploring their options, including seeking a way to leave Libya to escape a sustained bombing campaign by U.S.-led forces.

''We've heard about other people close to him reaching out to people that they know around the world," Clinton told ABC News. She described the communications as the Libyans exploring options and asking "What do we do?" "How do we get out of this?" "What happens next?''

In the interview, Clinton cautioned that some of what U.S. intelligence was picking up was probably "game playing" and "theater" and that the Libyan leader was unpredictable.

Additionally, Arab allies have told U.S. officials they have been contacted by members of Gadhafi's inner circle.

However, the officials said that none of Gadhafi's inner circle has indicated Gadhafi was ready to leave, nor have any of them suggested they are ready to abandon Gadhafi.

What could be the end game in Libya?

"They are indeed reaching out, but it's not clear to what end," one senior official said. "It's not clear what's the purpose of all these calls."

There are "no serious indications" that Gadhafi might leave the country, a U.S. intelligence official told CNN. The official said Gadhafi is not going to give up power or walk away from Libya -- "he's all in."

On Wednesday, Clinton was more vague about Gadhafi's intentions, but she suggested the international campaign was putting pressure on the regime. She told reporters during an event at the State Department that, "Gadhafi has a decision to make, and the people around him each have decisions to make."

"It will be up to Gadhafi and his insiders to determine what their next steps are, but we would certainly encourage that they make the right decision and not only institute a real, comprehensive cease-fire but withdraw from the cities and end the military actions and prepare for a transition that does not include Col. Gadhafi," she said.

In Cairo, Egypt, Defense Secretary Robert Gates suggested there were "a number of possible outcomes" of how the Libyan story might end, but that it would be up to Libyans themselves, specifically mentioning those closest to the Libyan ruler.

Gates suggested the political calculus inside Libya might change thanks to American and coalition airstrikes that have grounded his planes and destroyed some of his tanks and other heavy military equipment.

"A lot of people who were in opposition and who played a role in the early days have hunkered down and it may be the changed circumstances where he (Gadhafi) can't use his aircraft and where he is more challenged using his armor -- they may return to the fight." Gates said at a question-and-answer session in Cairo. "We just don't know that now."

CNN's Pam Benson and Charley Keyes contributed to this report.