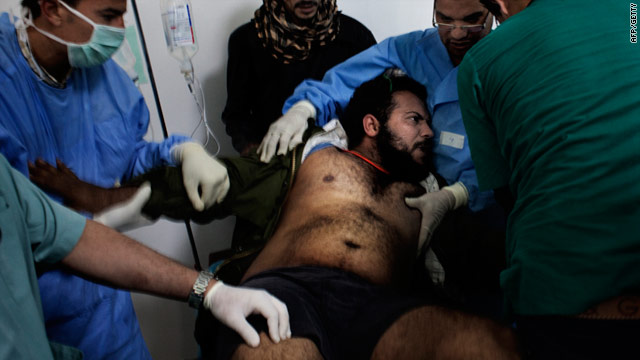 Doctors treat a wounded fighter in a Ras Lanuf hospital March 6. Medics in Misrata have complained of a lack of anesthesia.
STORY HIGHLIGHTS

(CNN) -- For days, the wounded just kept coming to the 60-bed central hospital in Misrata, a city under siege from forces loyal to Libyan leader Moammar Gadhafi. But there were no empty beds, no electricity -- only generator power. No anesthesia or painkillers.

A doctor said 109 people have died in Misrata over the past week. Six were killed Thursday by Gadhafi's rooftop snipers -- unseen but too often precise. More than 1,300 others have been wounded since the protests erupted in the western city last month.

People flooded the hospital, wounded in war that has raged between the opposition and Gadhafi's forces. The strongman's tanks have been pounding the city and bombs fell Thursday near the hospital, the doctor said.

They treated patients in corridors, and operated on them even without anesthesia.

They sent people with what the doctor called lesser injuries home to recuperate -- including people whose legs and arms were amputated.

"We don't have the space," he said, the weariness in his voice apparent even on a poor phone connection from Libya.

Snipers surrounded the hospital, he said. Thursday, patients were to a clinic. But the injured in the city could no longer seek help at the hospital. The snipers were shooting at the ambulances.

The coalition began airstrikes last Saturday and has been able to establish a no-fly zone that spans from east to west along Libya's coastline. But Gadhafi's forces are far from defeated.

They camped on the periphery of Misrata, trying to wrest it from opposition control, and leaving its people, including those at the central hospital, in a dire situation.