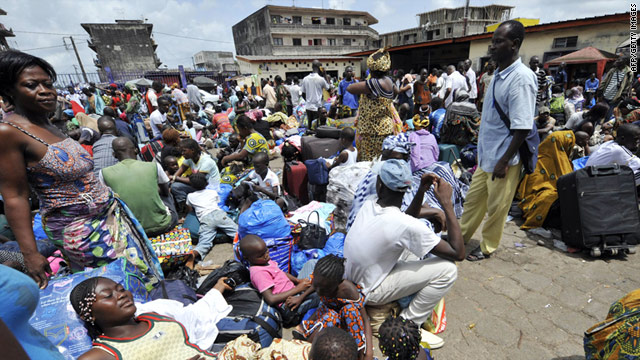 People wait at Adjame bus station for transport out of Abidjan and away from post-election violence, March 22, 2011.
STORY HIGHLIGHTS
RELATED TOPICS

(CNN) -- Nearly 1 million residents have fled Abidjan and others are displaced from their homes elsewhere in Ivory Coast's escalating bloodshed that started in December after a disputed presidential election, the United Nations refugee agency said Friday.

Not even that agency has been immune from the violence -- one of its warehouses came under attack Thursday in the town of Guiglo.

"This grave incident demonstrates the accelerated deterioration of the humanitarian situation in Ivory Coast which aggravates the suffering of the civilian population," said a statement from Bernard Valero, the spokesman for the French Foreign Ministry.

France and Nigeria submitted a draft resolution Friday to the U.N. Security Council that calls for sanctions against self-declared President Laurent Gbagbo and several others in his circle. It also urged the banning of heavy weaponry form the Abidjan area.

France's ambassador to the United Nations, Gerard Araud, said there have been many attempts to find a solution to the political stalemate, but Gbagbo has refused to cede power. The international community recognizes Gbagbo's challenger Alassane Ouattara as the legitimate winner.

Araud said the Security Council will take up the draft resolution next week.

A top U.N. official told the Security Council Friday blamed most of the violence on forces loyal to Gbagbo.

"The human rights situation is very grave, with a high number of human rights violations reported," said Assistant Secretary-General for Peacekeeping Atul Khare about the violence in Abidjan and also in the western regions of Ivory Coast.

Khare showed Security Council members pictures of some of the worst attacks in the past three months including the killing of seven women that was captured in a chilling video posted online. He also detailed an incident in which he said Gbagbo loyalists fired mortar shells into a market in Abobo, killing more than 25 people.

A spokeswoman for the U.N. High Commissioner for Refugees said the massive displacement of people is being fueled by fears of all-out war, not unfamiliar to the people of Ivory Coast. Divided over issues of land reform, identity and rights of citizenship, the west African nation exploded in a civil war in 2002.

The country was back on track to progress when the November election results shattered the peace.

Post election clashes have left at least 462 dead since December, some in grisly fashion, according to the United Nations. Human Rights Watch said a steady crescendo of abuses including arbitrary arrests and detentions, torture, enforced disappearances and politically motivated rape.

"Bus terminals are overcrowded with passengers desperate to get seats on vehicles heading to northern, central and eastern parts of the country where there has been no fighting so far," said Melissa Fleming, the refugee agency spokeswoman.

People are living with no electricity, clean water or adequate health care, said Carole Coeur, a field coordinator for Medicins Sans Frontieres (MSF or in English, Doctors Without Borders) in western Ivory Coast.

"There are no normal conditions of life," she said. "It's very difficult."

Coeur said medicine was in short supply -- many facilities have been looted -- and few hospitals -- many and clinics were operating because medical staff have fled. There are few places for people to receive treatment for illnesses like malaria and diarrhea.

Only one hospital remains open in Abidjan's restive Abobo neighborhood, where street battles have erupted frequently.

Dr. Okanta Chibuzo, an MSF emergency doctor who recently returned from an assignment in Abidjan, said he heard daily gunfire and admitted 10 to 15 people every day. MSF teams treated 66 people with bullet or shell wounds. None could be brought to the hospital by ambulance.

"Some of the wounded were brought in trucks that usually transport food," Chibuzo said. "All of them were urgent cases."Patients with common illnesses also need care. However, access is very limited, particularly for children with acute illnesses, pregnant women and people living with chronic diseases."

Humanitarian agencies including the United Nations and MSF have been struggling to help people -- often it has proved difficult to deliver aid because of chaos and security risks.

Ivory Coast's crisis is also affecting its neighbors. Liberia, where nearly 100,000 people have fled, is especially concerned that its own fragile eight-year peace could be threatened by events in Ivory Coast, Fleming said.

With the conflicts in Libya and the Middle East, the world has turned away from the crisis in Ivory Coast, said humanitarian workers. But to neglect it could lead to catastrophe, they warned.