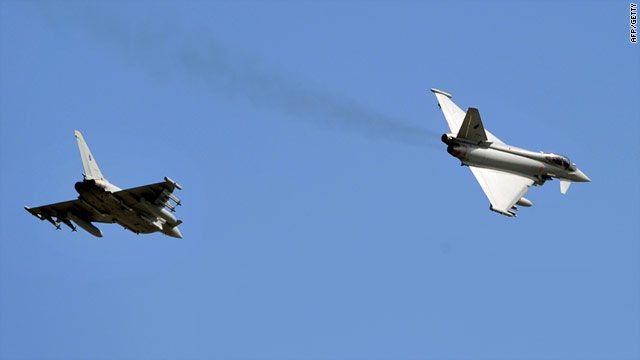 NATO is set to take control of enforcing the U.N.-backed no-fly zone over Libya from the U.S..
STORY HIGHLIGHTS

(CNN) -- NATO is set to take command of the U.N.-backed no-fly zone over Libya, seizing control from the U.S., which was keen to hand over the reins.

Under an agreement reached Thursday NATO forces will be able to close Libyan air space to all flights except humanitarian ones and will be able to use force in self-defense.

The agreement follows days of political infighting among the coalition, with Turkey and the Arab League expressing strong reservations about a NATO-led force.

Arab League support was crucial for the passage of the U.N. Security Council Resolution 1973, passed on March 17, and NATO Secretary-General Anders Fogh Rasmussen was keen to emphasize that the mission was not European-dominated.

"It is a broad international effort in which we will include partners from the region that have pledged to contribute to this protection of civilians in Libya," Rasmussen said in a written statement.

When will the transition take place?

The U.S. is keen to take a supporting role in the operations as soon as possible, and NATO should be in control by Sunday or Monday, according to NATO officials.

White House press secretary Jay Carney promised Thursday afternoon that U.S. military forces will be shifting to a "support and assist" role in the international coalition within a matter of days.

The United States is engaged in a "time-limited, scope-limited" action, Carney said.

Will NATO take control of the entire operation?

No. Not to begin with at least. The Libyan mission will initially have two parts -- NATO will be responsible for enforcing the no-fly zone and arms blockade, and the U.S.-led coalition that launched the mission will still be handling other military duties needed to defend civilians.

However, NATO could take on a wider responsibility, with ambassadors expected to discuss a plan which would see NATO in charge of all military aspects of the action against Libya.

"We are considering whether NATO should take on a broader responsibility in accordance with the UN Security Council resolution. But that decision has not been made yet," a NATO spokesman said Thursday.

CNN's Paula Newton says: "Whether NATO will assume the role of protecting civilians on the ground -- as mandated by a United Nations Security Council resolution -- remains at issue. The operational heart of the mission could hinge on if and when to intervene with airstrikes when civilians appear to be at risk.

"A decision on what NATO officials are calling 'no-fly plus' could come as early as Sunday after a meeting of NATO ambassadors."

Why is the U.S. so keen to hand over control?

There are a number of reasons according to analysts -- the potential financial burden and the fears of a public backlash at home, especially if the operation extends over a long period of time and is expensive.

"From the beginning it was always on the cards that the U.S. would come in early with its (military) specialty and then hand over control. Uncle Sam is quite entitled to step back," says Charles Heyman, senior defense analyst at armedforces.co.uk.

"Libya is on the fringes of Europe, and the reality is that you can't expect the U.S. to pay for Europe's defense. The U.S. is under all kinds of pressure... the U.S. defense budget is sucking $712 billion from the economy every year. It is also facing pressure over its presence in Afghanistan."

Barak Seener, a Middle East research fellow at the Royal United Services Institute, a London-based think tank, says: "The Obama administration may seek to back out of the no-fly zone, placing the onus on Britain and France... domestically there will be increased condemnations for the open-ended costly nature of the no-fly zone."

Is there a chain of command in place?

Rasmussen said NATO would use the mission's already established chain of command for enforcing the no-fly zone. The NATO supreme commander, an American, would be in charge, but the mission would be under NATO control, Rasmussen noted.

What about intelligence sharing?

CNN's Paula Newton says this should not be a problem. "They've gone through this before. Any structures in place will continue."

Is the new command structure likely to work?

"It is hard to imagine any other organization taking control, there is really no alternative (to NATO) in the absence of the U.S.," says David Hartwell, senior Middle East and North Africa expert at London-based defense analyst Jane's.

"It makes sense however, I imagine the U.S. will still be providing most of the air power," adds Hartwell.

What part will Muslim countries play in the new structure?

The United Arab Emirates announced Thursday that it will send 12 aircraft in the coming days to help patrol and enforce the United Nations-mandated no-fly zone. And Turkey, once reluctant of military operations, agreed to the use of an air base in Izmir.

Other Muslim nations participating in the Libya mission include Qatar, which will begin flying planes this weekend, and Jordan, which has agreed to provide humanitarian support.

Is Gadhafi still a target?

No major political leader has yet openly called for the targeting of Libyan leader Moammar Gadhafi, although UK Prime Minister David Cameron, French President Nicolas Sarkozy and his U.S. counterpart Barack Obama have said they want Gadhafi to go.

There are divisions about the nature of the military operation in Libya because the U.N. Security Council resolution is too ambiguous, say experts.

"I think the fact that there is some flexibility, some ambiguity in the resolution has created the impression that it can mean many things to many people... tensions remain," says Hartwell.