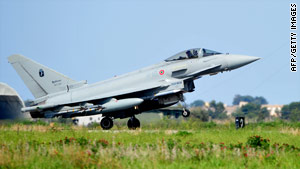 A Eurofighter from NATO member country Italy lands in Sicily on Friday after a mission.
STORY HIGHLIGHTS

Brussels, Belgium (CNN) -- As NATO prepares to take over the Libya mission, alliance officials said Friday they are considering a broader role that goes beyond enforcement of a no-fly zone.

After days of acrimonious discussion, NATO officials hailed their decision to take command as swift and historic and vowed a "seamless" transition of leadership from the United States to NATO, which could happen as early as Sunday.

"In the course of a single week NATO allies have launched both the arms embargo and the no-fly zone operations," said NATO spokeswoman Oana Lungescu. "This is a clear demonstration of the allies commitment to fulfill their obligations under the U.N. mandate and to show their resolve to do what it takes to protect the people of Libya."

But whether NATO will assume the role of protecting civilians on the ground -- as mandated by a U.N. Security Council resolution -- remains at issue. The operational heart of the mission could hinge on if and when to intervene with airstrikes when civilians appear to be at risk.

A decision on what NATO officials are calling "no-fly plus" could come as early as Sunday after a meeting of NATO ambassadors.

NATO and U.S. officials say discussions are ongoing to bring the entire mission under NATO control. A senior American administration official said that while countries have agreed NATO will take over the rest of the mission, "there are a couple more steps in the planning process that will need to be taken."

A senior U.S. defense official said that NATO's announcement "has not caused any change to our operations."

"They're just taking over an operation that's for the most part, already established," the official explained.

Beyond that, tense exchanges are also expected at a summit in London next week, where officials will try to lay out how far they are willing to go militarily against Moammar Gadhafi.

"We expect that ministers will set the wide political guidance at next week's international conference in London to take forward the implementation of the UN Security Council Resolution 1973," Lungescu said.

The main question, the officials said, is whether NATO forces should attack Gadhafi's military as part of the mission to protect civilians. The Turkish contingent is arguing for the most limited interpretation of what is allowed under the U.N. resolution.

"The tricky question is when you have a situation where his forces are advancing on some positions rebels hold, do you hit?" a senior U.S. official asked. "If there are forces that are trying to get through rebel forces to kill people, there are some in the alliance like the Turks who said, 'we didn't sign up for that.' There are those like the French who are saying, 'of course we did."

The U.S. official said the Obama administration's interpretation is to do whatever is required to protect civilians. In the rush to quickly protect civilians from Gadhafi's forces closing on Benghazi, the sources said that some countries and Arab League Secretary General Amre Moussa might have not fully understood what "any means necessary" meant.

Officials and diplomats said they are confident the rules of engagement can be worked out over the weekend before NATO takes command. "Let's just give it a day or two and see where things stand," the senior defense official said.

Overall NATO command will be based in Naples, Italy, but Turkey has agreed to allow a sub-command stationed at an airbase in Izmir, Turkey. NATO is already supervising naval embargo operations from Naples.

The alliance said Friday that Canadian Lt. Gen. Charlie Bouchard, stationed in Naples, will take the lead for the Libya mission.

The Turkish air component will help give NATO the credibility it seeks in taking military action against a Muslim nation.

The tone of mission, however, already seems to have shifted, with NATO commanders attempting to enforce the U.N. resolution to the letter of the law.

"No-fly zones are impartial, there is no one authorized to fly within that zone," said Group Captain Geoffrey Booth of NATO's Air Force Command. "It is not necessarily pro-Gadhafi or anti-Gadhafi forces. It's the impartial enforcement in line with the (resolution)."

CNN's Chris Lawrence and Elise Labott contributed to this report.