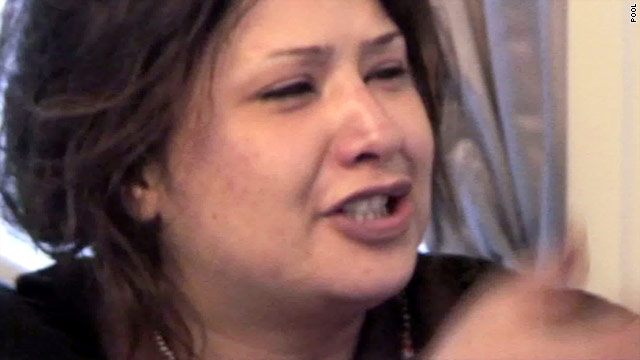 Read CNN cameraman's account of the incident in the Tripoli hotel.

Tripoli, Libya (CNN) -- A Libyan woman who stormed into a Tripoli hotel Saturday, telling foreign reporters that she had been raped by government troops, has been released, and her case is being investigated, government spokesman Moussa Ibrahim said Sunday.

The matter is "a criminal case against four individuals" who have an attorney, he said. Among those accused by Eman al-Obeidy is the son of a high-ranking official, he said. The general attorney is looking into the case.

The woman "hasn't committed, you know, any particular major offense," Ibrahim said. "She just entered a place she wasn't supposed to enter."

He said al-Obeidy and her family have been asked if they want to be interviewed by "one or two, preferably female, reporters to verify that she's fine, she's healthy, she's free with her family."

But Ibrahim refused to take further questions on the issue Sunday, noting that Libyan society is "very conservative."

CNN's Nic Robertson, who has been on the ground in Tripoli since February 27, cautioned against taking Ibrahim's statements as fact, noting that "oftentimes what he says doesn't match reality."

"We've been told by the government that she's with her family, but when we asked, 'Could we go and see them?' the government official said that would be up to the family," Robertson said, adding that journalists have indeed been in touch with the family, who have said they would grant permission to see al-Obeidy.

However, international journalists, including CNN's staff, are not allowed to move freely in the Libyan capital and are escorted out of the hotel only on organized outings by government minders. Saturday's incident was the first time a Libyan opposed to Gadhafi attempted to independently approach the journalists in Tripoli.

Robertson also tried to ask Ibrahim about statements the spokesman made referring to al-Obeidy as a prostitute, but he declined to answer the question while saying, "I'm not withdrawing from what I said."

"We need to protect her privacy, her daughter's rights when she grows up," Ibrahim said. "We need to make this as criminal case, as legal a case as possible without talking about people's history, their files, their previous crimes or their lifestyle."

Wedad Omar, the woman's cousin, told CNN that the 30-year-old al-Obeidy is single and does not have a daughter.

Al-Obeidy burst into the hotel Saturday as international journalists were having breakfast. Her face was bruised, as were her legs. She showed the journalists blood on her right inner thigh.

"Look at what Gadhafi's brigades did to me," she said. "My honor was violated by them." She displayed what appeared to be visible rope burns on her wrists and ankles.

CNN could not independently verify al-Obeidy's story, but her injuries appeared consistent with what she said.

Government officials moved to stifle her, but she persisted. Security forces moved to subdue her, and even a member of the hotel's kitchen staff drew a knife. "Traitor!" he shouted at her. Another staffer attempted to throw a dark tablecloth over her head.

One government official, who was there to facilitate access for journalists, pulled a pistol from his belt. Others scuffled with the journalists and wrestled them to the ground in an attempt to take away their equipment. Some journalists were beaten and kicked. CNN's camera was confiscated and deliberately smashed beyond repair.

Officials later said the woman was sane and would bring criminal charges against her attackers.