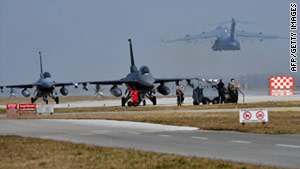 U.S. military aircraft are on the move at Aviano Air Base, in Italy, on Friday.
STORY HIGHLIGHTS

Brussels, Belgium (CNN) -- NATO's North Atlantic Council on Sunday approved an operations plan that will shift the entire Libyan military mission to alliance command, officials said, easing the burden on the United States and its allies to protect civilians in the war-torn country.

NATO ambassadors unanimously approved a so-called "no-fly plus" plan that will put the alliance in charge of protecting civilians as well as enforcing a no-fly zone and an arms embargo.

"Our goal is to protect civilians and civilian-populated areas under threat of attack from the Gadhafi regime," NATO Secretary-General Anders Fogh Rasmussen said. "NATO will implement all aspects of the U.N. resolution. Nothing more, nothing less."

The new NATO mandate will begin in two to three days, NATO officials said, allowing the current coalition, led by the United States, the United Kingdom and France, to stand down.

US Libya mission: Fly-over with no end?
RELATED TOPICS

At the same time, NATO was putting the final touches on its takeover of the no-fly zone over Libya. The handover from the United States and allies should be complete by Monday. NATO officials described the transition as a phased and seamless operation.

A senior U.S. administration official spoke to reporters soon after the announcement.

He stressed the NATO mission is to protect civilians and did not rule out the possibility of an attack on the rebels if they were to go on the offensive and strike cities with civilian populations, now held by pro-Gadhafi forces.

The official also said he expected more countries to participate in the Libyan mission now that NATO has assumed command of it. He praised the speed with which the group of 28 allies reached a consensus.

The office of British Prime Minister David Cameron similarly cheered the news of a NATO agreement.

"NATO is already enforcing the arms embargo and the no-fly zone. Today's agreement to transfer complete command and control of all military operations to NATO both ensures that partners from the region are able to participate and represents a significant step forward as we plan for the next phase of this vital mission," it read.