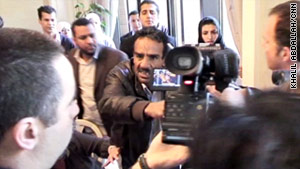 Tripoli, Libya (CNN) -- CNN photojournalist Khalil Abdallah was having breakfast Saturday in a Tripoli hotel that houses foreign press when a woman burst into the restaurant, screaming that she had been raped and beaten for days by Moammar Gadhafi's brigades.

Her sudden entrance startled the group of international journalists, who were about to begin another day covering the crisis in Libya.

The woman's face was heavily bruised, a long bruise running down the left side of her cheek. She walked around, sobbing, shouting, lifting her dress to show a bloody thigh. Her ankles and wrists were bloody where she said she had been bound.

One of the few present who spoke Arabic, the photojournalist understood her pleas.

"She was saying, 'We are all Libyans! Why don't you treat us the same?' " Abdallah recounted Sunday for CNN.com.

The woman told the journalists that she had been picked up at a government checkpoint east of Tripoli, tied, beaten and raped for two days.

Her name was Eman al-Obeidy, she said.

"Look at what Gadhafi's brigades did to me!" she screamed. "My honor was violated by them!"

Reporters gathered around her, trying to calm her, Abdallah recalled.

He and other photojournalists dashed for their cameras.

"We were all in shock," Abdallah said, trying to keep a steady hand.

He knew that minders -- the men Libya's government assigns to foreign journalists to monitor their every move -- were nearby.

Reporters had barely asked a few questions before those minders were on them, pushing and shoving reporters to the side, trying to jerk the woman away. Some of them were wearing their distinctive red badges, Abdallah said, while others were in plain clothes. They threw punches. Journalists tried to defend themselves and keep the woman away from the minders.

A correspondent for Britain's Channel 4, Jonathan Miller, tried to push one of the minders back.

The woman was trying to fight back as well, Abdallah said.

"From that point on, everybody in this hotel was against us (the journalists)," the photojournalist recounted.

Minders ran after journalists, jumping on them, beating them, he said.

At one point a bag was placed over the woman's head and she was led out to the hotel garden.

She was questioned for about 40 minutes, and then minders came back inside. They announced that the woman was crazy and that she was being taken to the hospital.

"All the minders were telling us she was drunk or had mental problems," Abdallah said.

A short while later, the woman was led through the lobby. Journalists followed, protesting, shouting for the men to let her go.

A journalist can be heard on video asking her: "Are you OK?"

"No," the woman answers, her voice shaky.

She yells into a camera: "If you don't see me tomorrow, then that's it!"

The woman is forced into a waiting car. She shouts that she is being taken to jail.

The minders told reporters that they could see the woman again, later.

"We have been told that we'd see people again, but we never do," said Abdallah.

An image he captured shows a minder pointing his finger at Abdallah just before snatching his camera and breaking it.

"He ripped the microphone off, the viewfinder, his nails sunk into my arm," said Abdallah. "I was pulling the camera one way; he was pulling it the other way."

While wrestling for his camera, Abdallah saw a minder standing nearby holding a 9 mm handgun. The photojournalist let go and slowly began to back out of the restaurant.

Then Abdallah heard something from the minders that he has come to expect, but that never fails to sting him.

"Once you're labeled like that, it doesn't matter what your citizenship is," he said.

"But what I felt more was terrible for this woman and how the government is going to deal with her.

"That is the thing that is most disturbing."

The Libyan woman who stormed into the Tripoli hotel Saturday to tell foreign reporters that government troops raped her has been released, government spokesman Moussa Ibrahim told reporters at a news conference Sunday. CNN has not been able to independently confirm the spokesman's announcement.