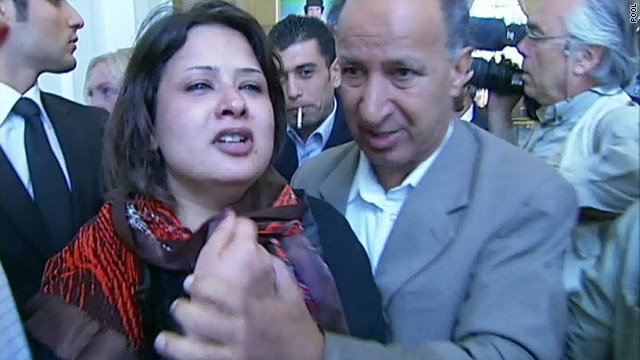 Eman al-Obeidy burst into a hotel Saturday, saying she had been raped for two days by Moammar Gadhafi's brigades.
STORY HIGHLIGHTS

(CNN) -- The mother of a woman who burst into a Tripoli hotel to tell journalists that she had been beaten and raped by troops loyal to Libyan leader Moammar Gadhafi said Monday that her daughter is still being held.

Her claim contradicts an earlier statement from the government, which has said that Eman al-Obeidy was released and is at home with her family.

"Yesterday, late at night at 3 a.m., they called me from Bab al Aziziya," Gadhafi's compound in Tripoli, al-Obeidy's mother told Al-Jazeera television Monday. "And they told me: Make your daughter Eman change her statement ... and we will release her immediately and whatever you ask for you will get, whether money, or a new apartment, or guaranteeing financial security for you and your children. But just tell Eman to change her statement."

Spokesman Moussa Ibrahim said then that al-Obeidy and her family were asked if they wanted to be interviewed by "one or two, preferably female, reporters to verify that she's fine, she's healthy, she's free with her family." He refused to take further questions on the issue, repeatedly stating that Libyan society is "very conservative."

A group of lawyers and human rights activists tried to approach Al-Obeidy's sister's house Monday, but were blocked by security forces. The sister's mobile phone has apparently been turned off, a source with the opposition in Tripoli told CNN, and no one has seen her since the incident at the hotel.

The family of al-Obeidy said she is a lawyer -- and not a prostitute or mentally ill as Libyan government officials initially said after the incident. The government has since changed its story, saying she is sane and pursuing a criminal case.

Al-Obeidy's father told Al-Jazeera that his daughter "has her full mental capabilities and she is a graduate of law school and a lawyer and she is pursuing higher education in Tripoli. And she was kidnapped by Gadhafi's tyrannical forces."

"I am not ashamed of my daughter," al-Obeidy's mother, who spoke from an undisclosed location in Libya, told the network. "I am proud of her because she has broken the barrier. She broke the barrier that no man can break. And those dogs there with him, Moammar, (are) the criminals!"

She urged the youth of Libya to take action.

Al-Obeidy burst into a Tripoli hotel as international journalists were having breakfast Saturday morning. Her face was bruised, as were her legs. She showed reporters blood on her right inner thigh.

CNN's Nic Robertson and Salma Abdelaziz contributed to this report.