Alleged Libyan rape victim's mother would slap Gadhafi if she could 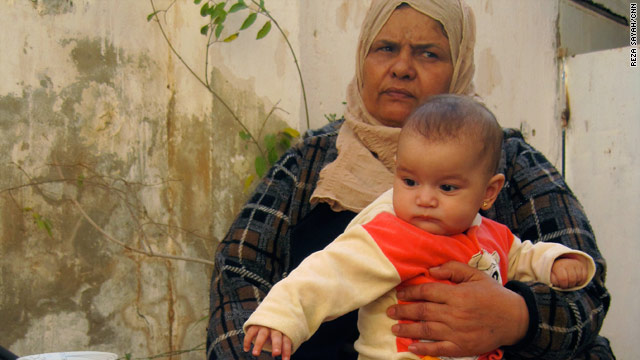 Tobruk, Libya (CNN) -- Aysha Ahmed and Attique Saleh lived in silence for more than four decades under the ironfisted rule of Moammar Gadhafi. But not anymore. Not after they watched their daughter manhandled and dragged away from a Tripoli hotel.

Eman al-Obeidy's parents told CNN Tuesday they are no longer afraid to publicly condemn the Libyan strongman, an act that would have been unthinkable just weeks ago.

If Gadhafi were to face Ahmed now, she would slap him, she told CNN Tuesday.

Al-Obeidy burst into the hotel housing international journalists in Tripoli Saturday and told them she had been raped by 15 militia men. Cameras captured the drama as al-Obeidy, sobbing and screaming, wanted the world to know the brutality of Gadhafi's regime.

But Ahmed contradicted the government, saying the government was still detaining her daughter, in an interview in the eastern city of Tobruk. She said she wanted Gadhafi to air footage of al-Obeidy as proof of her safety.

Ahmed said she cannot forgive the grave injustice her daughter has suffered.

She said the family has even received phone calls offering bribes to reject their daughter's claims and to tell their daughter to change her story.

But they stand by her. They believe that Gadhafi's regime is trying to discredit her as a woman who has been raped and -- as some people in conservative Muslim societies believe -- therefore dishonored.

An in-absentia engagement ceremony held at a mosque in Tobruk Monday night proves that al-Obeidy's family and tribe stand by her, Ahmed said.

She described her daughter, 29, as a kind, caring woman who wanted to be a journalist. She chose to study law instead when she realized there was no freedom of the press in her homeland.

The government first portrayed al-Obeidy as mentally ill and a prostitute. It has since changed its story, saying she is sane and therefore able to withstand legal proceedings.

She also harbored a deep love of languages, particularly Italian and French, Ahmed said. As a young girl, she looked out over the deep blue waters of the Mediterranean and called on the oil tankers to carry her to France.

Moussa Ibrahim said then that al-Obeidy and her family were asked if they wanted to be interviewed by "one or two, preferably female, reporters to verify that she's fine, she's healthy, she's free with her family."

He refused to take further questions on the issue, repeatedly stating that Libyan society is "very conservative."

A group of lawyers and human rights activists tried to approach al-Obeidy's sister's house Monday, but were blocked by security forces. The sister's mobile phone has apparently been turned off, a source with the opposition in Tripoli told CNN, and no one has seen her since the incident at the hotel.

Ahmed said she was also concerned for the safety of her other daughter.

Al-Obeidy stormed into the Rixos Hotel as international journalists were having breakfast Saturday morning. Her face was bruised. So were her legs. She showed reporters blood on her right inner thigh.

Speaking in English, she said had been held against her will for two days and raped by 15 men.