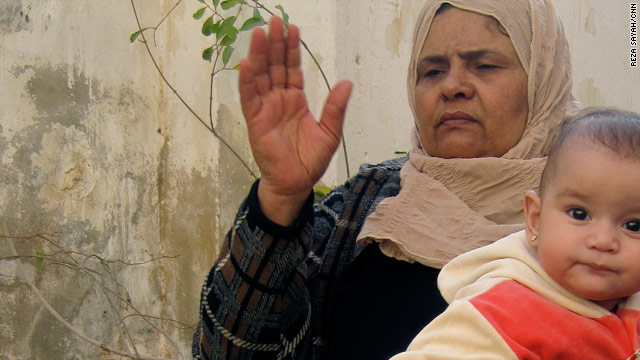 Tobruk, Libya (CNN) -- Like everyone else, Aisha Ahmad watched the riveting drama unfold in a Tripoli hotel as a desperate woman burst into a dining room filled with journalists, sobbing, screaming, wanting the world to know she had been raped by 15 of Moammar Gadhafi's militia men.

The arresting images of how swiftly the woman, Eman al-Obeidy, 29, and the journalists were stifled stirred viewers around the world. But perhaps none more so than Ahmad.

This was her daughter. And she was enraged.

Just weeks before, Ahmad might have wept in silence. But now, with war engulfing Libya and its future hanging in the balance, Ahmad feared Gadhafi no more.

"If I were to see his face, I would strangle him," she told CNN in an interview at her modest home in the eastern coastal city of Tobruk.

No one would do that unless they were raped, and especially in a conservative society.
--Mona Eltahawy, columnist on Arab and Muslim issues.
RELATED TOPICS

This is where she raised her 10 children with her husband, a retired customs agent.

As a little girl, al-Obeidy looked out over the deep blue waters of the Mediterranean, calling on the oil tankers to carry her away to France. She loved languages, most of all French.

Ahmad recalled her daughter wanting always to be a journalist, but, discouraged by the lack of press freedoms under Gadhafi, she opted instead to study law in Tripoli and make a better life. She was living with her sister when she was, as she claimed, held against her will for two days, beaten and raped.

Ahmad said she believes her daughter's every word, despite attempts by the Gadhafi regime to discredit her.

The Libyan government first said al-Obeidy was mentally ill and drunk. They called her a prostitute.

Later, it changed its story and said al-Obeidy was sane enough to withstand legal proceedings. Libyan government spokesman Moussa Ibrahim said the men accused of raping al-Obeidy are being investigated, but the suspects, in turn, have filed counter-charges for slander.

The attempt to discredit al-Obeidy as a promiscuous, un-Islamic woman ties into the idea of sexual shaming in a conservative Muslim society where it's commonly believed that a woman who has been raped has lost her honor, said Mona Eltahawy, a columnist on Arab and Muslim issues.

For a woman in such a society to come forward to claim she has been raped is no small thing.

"No one would do that unless they were raped, and especially in a conservative society," Eltawhy told CNN.

Al-Obeidy's act ended up being as significant as the discontented fruit vendor in Tunisia who set himself afire and sparked revolt in the entire region, Eltawhy said. The way al-Obeidy spoke out was unprecedented and she has already been hailed a hero on social networking sites.

Ahmad said she received a call Sunday from a man who offered her a bribe to reject al-Obeidy's claims and persuade her daughter to change her tale.

Ahmad refused. She stands by her daughter, she said. So does her entire family and tribe.

To show their support, the family held an in-absentia engagement ceremony for al-Obeidy at a mosque in Tobruk Monday. No one here thinks she has lost her honor.

The government said al-Obeidy was freed but she has not been seen publicly since she was dragged away by security men and bundled into a waiting white car outside the Rixos Hotel Saturday.

Ahmad has not heard from her daughter and challenged Gadhafi to air video of her on state television as proof of her well-being.

Ahmad said she was also worried about her other daughter. No one has apparently seen her either since Saturday.

A group of lawyers and human rights activists tried to approach al-Obeidy's sister's house Monday, but were blocked by security forces. The sister's mobile phone has apparently been turned off, a source with the opposition in Tripoli told CNN.

Al-Obeidy's story raced around the world after she stormed into the Rixos Hotel as international journalists were having breakfast Saturday morning. Her face was bruised. So were her legs. She showed reporters blood on her right inner thigh.

She said she had been held against her will for two days and raped by 15 men. Her visible injuries appeared to support her claims, but CNN could not independently verify al-Obeidy's story.

"Look at what Gadhafi's brigades did to me," she said. "My honor was violated by them." Al-Obeidy displayed what appeared to be rope burns on her wrists and ankles.

Government officials tried to subdue her, but she persisted. Even a member of the hotel's kitchen staff drew a knife. "Traitor!" he shouted. Another staffer tried to throw a dark tablecloth over her head.

One government official, who was there to facilitate access for journalists, pulled a pistol from his belt. Others scuffled with reporters and wrestled them to the ground in an attempt to take away their equipment. Some journalists were beaten and kicked. CNN's camera was confiscated and smashed beyond repair.

As security forces dragged her away, al-Obeidy warned: "If you don't see me tomorrow, then that's it."

Ahmad said she has not been able to stop crying. She hasn't slept or eaten.

She sees only her daughter's distress shared so publicly at a pivotal moment of her nation's history.

CNN's Nic Robertson and Khalil Abdallah contributed to this report