With defections, Libya has tough time getting envoy to U.N. 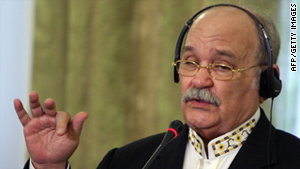 Miguel d'Escoto Brockmann is a former president of the U.N. General Assembly and a former Nicaraguan foreign minister.
STORY HIGHLIGHTS

(CNN) -- The drama over who will next represent Libya at the United Nations deepened Thursday in the wake of two apparent defections.

Treki, who recently served as the president of the U.N. General Assembly, was to replace Abdurrahman Mohamed Shalgham as ambassador in New York, but he never arrived.

A relative of Treki and an opposition leader said Thursday that Treki has defected and was in Cairo.

Cairo-based Libyan opposition activist Hani Soufrakis said he spoke with Treki several times by phone on Thursday, and confirmed that the diplomat had cut ties with Gadhafi's government.

Treki declined to speak with CNN, telling an associate he was "too tired."

With recent questions over Treki's whereabouts, it appeared Libya had shifted to Miguel d'Escoto Brockmann, a former president of the U.N. General Assembly and a former Nicaraguan foreign minister, to be its envoy.

But that came before news that the Libyan foreign minister who supported him defected Wednesday.

Former Libyan Foreign Minister Moussa Koussa signed a letter requesting that Brockmann be the new Libyan ambassador. The letter, produced by the Nicaraguan government, was seen by several U.N. member countries, but was not properly submitted.

Brockmann canceled a Thursday news conference and another that had been scheduled for Friday.

The United Nations said Thursday it has still not received an official, legal form from Libya requesting Brockmann be its man.

U.S. Ambassador to the U.N. Susan Rice told reporters she found it intriguing that a former Nicaraguan foreign minister wants to represent Libya. She said he could face a problem because he is in the United States on a tourist visa and can't legally represent a foreign country on a U.S. tourist visa. Rice said he would have to leave the country and then reapply for a diplomatic visa.

Rice warned if Brockmann was found representing a country while here on a tourist visa, his visa status would be reviewed.

Gadhafi's top two diplomats at the U.N. split with him weeks ago, but are still allowed to enter U.N. grounds. One of them, Shalgham, was warmly greeted by U.S. President Barack Obama on Tuesday at a ceremony at the U.S. mission.