Oil vs. cocoa: Why Ivory Coast isn't like Libya 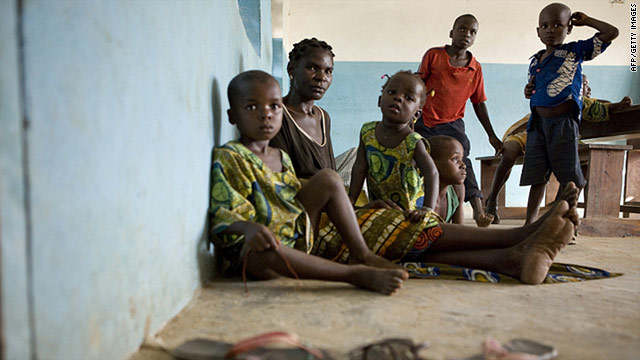 Refugees from Ivory Coast rest in a village in southern Liberia in this photo dated March 24.
STORY HIGHLIGHTS

(CNN) -- Violence is escalating in the west African nation of Ivory Coast, where president-elect Alassane Ouattara is trying to oust incumbent Laurent Gbagbo, who refused to leave office after losing an election.

But the international response -- limited to a U.N. peacekeeping force already deployed there -- has paled by comparison with the U.S. and NATO air strikes targeting forces to Moammar Gadhafi in Libya to prevent attacks on rebels and civilians.

Read an explainer on the situation in Ivory Coast

Nigeria's foreign minister last month accused the West of hypocrisy in its reactions to the two crises, lashing out at the "contradictions" of imposing a no-fly zone over Libya but failing to to take action to protect civilians in Ivory Coast.

This raises questions about the strategic factors that have influenced the international response to the turmoil facing both countries:

Are there any similarities to the situation in Libya?

Analysts say that there are sharp differences in the problems facing the two countries, with Ivory Coast's problems evolving over a period of years before coming to a boil in recent weeks compared to Libya's relatively recent turmoil. But, they say, there are humanitarian concerns over the violence in both countries.

"The two conflicts are very separate, but what is similar is the potential threat to the civilian population," says Phil Clark, a lecturer in Comparative and International Politics at London's School of Oriental and African Studies, who points out that global intervention in both countries has been focused on protecting hundreds of thousands of people at risk rather than on regime change.

But, says Gilles Yabi, a West Africa analyst with the International Crisis Group, the situation on the ground is vastly different with Gbagbo -- whom the United Nations and the United States have urged to stand down -- having no access to planes and helicopters like those initially deployed by Gadhafi. "We have to be quite prudent about making comparisons," he said.

What are the differences in international response?

Again there are similarities, with both situations prompting U.N. Security Council resolutions mandating international military intervention, albeit on different scales. In Libya, aircraft were deployed to attack Gadhafi's air defenses and to protect opposition rebels and civilians from government troops.

In Ivory Coast, extra troops were authorized earlier in the year increasing the size of the U.N. peacekeeping force to 11,000, while France has dispatched 300 military personnel.

Tom Cargill, an Africa expert at the Chatham House think tank, says U.N.-sanctioned air strikes in the Ivory Coast conflict are unlikely. "The situation has moved quickly with the rebels moving into built up areas, so there hasn't been time to get a mandate from the U.N., but because they are in built-up areas, that kind of intervention probably won't be something air forces would consider."

Why are there differences?

Analysts disagree on the reasons. Cargill says the two cannot be compared since Ivory Coast has endured years of crisis and a sustained international engagement aimed at finding a political solution. Others like Clark point to more strategic factors, not least the fact that Western countries feel over-stretched by Libya and are unwilling to commit to the same level of action in Ivory Coast.

"I think Libya has in a sense acted as a kind of deterrent to collective action," says Knox Chitiyo, head of the Africa program at the UK's Royal United Services Institute for Defence and Security Studies.

"In terms of escalation, [Ivory Coast] has been unfortunate in terms of timing, as the world's attention has been focused on the Middle East and particularly Libya, so the Ivory Coast, which has been a slow-burning crisis, fell off the radar."

Is oil a factor?

Yes, say some analysts. As a major oil producer, Libya's strategic significance is far greater than cocoa- and coffee-producing Ivory Coast, says Clark. Libya's potential as an incubator for Middle Eastern democracy is also an attention-grabber for Western countries, he says.

"There is significant concern over Libya's oil and what that would mean for Western strategic interest and there's a sense that Libya fits into this wider pattern of democratization and the falling of draconian regimes in North Africa and the Middle East."

Knox adds: "Oil is seen by the West as a more strategic commodity than cocoa if we're to be quite blunt."

Is America likely to get involved in the same way it has in Libya?

No, says Knox, partly because as he has shown with Libya, President Barack Obama is unwilling to take a leading role in multinational intervention.

But, he says, this is also because Obama would find it tough to convince a public disillusioned by America's experiences in Iraq and Afghanistan, particularly given Ivory Coast's perceived lack of strategic significance.

"We've seen that Obama has had a real problem selling [intervention] to the U.S. audience," he said.

Why is France so involved?

As Ivory Coast's former colonial ruler, France not only has experience of working in the country but also appears to feel a duty to do so, pressing for Security Council action and dispatching troops.

This, says Yabi, creates its own problems as Gbagbo uses the French presence for his own benefit. "Anti-colonial discourse is one of Gbagbo's political weapons and he is trying to resuscitate that rhetoric against France."

Knox adds that France's involvement points to a broader campaign by Paris to inject itself into the international arena, as punctuated by President Nicolas Sarkozy (who is seeking re-election next year) taking a lead role in urging military action in Libya.