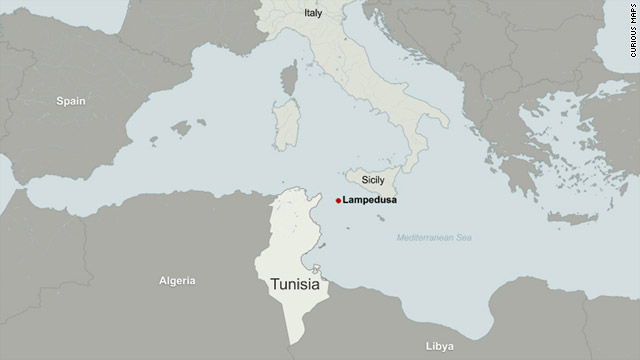 A steady flow of North African migrants have set sail from Tunisia to the Italian island of Lampedusa.
STORY HIGHLIGHTS

(CNN) -- An estimated 100 or more would-be North African migrants remained missing Wednesday, a day after the boat they were in capsized in the Mediterranean Sea, officials said. The incident is the latest of a number of tragic ends in what has become a steady flow of people who set sail from Tunisia to the Italian island of Lampedusa.

Political unrest, increased enforcement in other areas and calmer waters have all contributed to what is becoming an issue that the European Union will have to face.

Under a European Union directive, the member countries are to distribute a mass of unauthorized immigrants through a yet-to-be determined formula among all the countries, said Demetrios Papademetriou, president of the Migration Policy Institute. According to this directive, temporary protection is triggered when there is a "mass influx" of displaced persons,

This directive remains untested, but the current crisis is such that they might be forced to face it.

According to Papademetriou, more than 22,000 migrants have landed on Lampedusa in the past few weeks. Though owned by Italy, Lampedusa's closest shore is Tunisia.

"Of course, it's a crisis, but the Europeans do not want to call it a migration crisis," he said.

In the most recent incident, the boat was carrying about 200 passengers when it sank about 39 miles (62 kilometers) west off Lampedusa in Maltese waters, the Italian Coast Guard said. About 100 remained missing. That number is in some question. According to the International Organization for Migration, there were 300 passengers, and number of missing was even higher, at 250.

"The loss of life is all too common when it comes to this exodus," he said.

According to IOM, the majority of unauthorized immigrants arriving in Lampedusa are Tunisian and come from the Tunisian ports of Zarzis, Djerba and Sfax. Some 2,000 other African migrants have arrived on the island after sailing from the Libyan coast, the agency said.

A popular uprising in Tunisia led to the ouster of its president, Zine al-Abedine Ben Ali, in January. While protesters succeeded in spurring a regime change there, many Tunisians are not seeing the kind of transformation they were imagining.

"I come from Tunisia, everyone you see here comes from Tunisia, we are all afraid after the revolution that has taken place because nothing has changed up until now," said one migrant who made it to Lampedusa. "From the date of January 14 (when Ben Ali left), nothing has changed. All of us here, we are not asking for anything, we only ask for a possibility to find work in Europe."

In response to the migration, the Italian government has declared a humanitarian emergency and has asked the European Union for assistance in blocking their arrival.

This week, Tunisia's Interior Minister Habib Essid met with his Italian counterpart Roberto Maroni and signed the minutes of a technical agreement that would be the basis for an immigration policy based on economic, social and security considerations, the official TAP news agency reported.

The agreement will include economic development for regions in Tunisia that are considered zones from which most unauthorized immigrants come, TAP reported.

Italy also agreed to provide Tunisian authorities with the equipment to bolster its border security to deter Tunisians from making the perilous trip to Lampedusa.

In addition to the Tunisians, the unrest and fighting in Libya has created an influx of Libyans who have escaped to Tunisia and then out to sea.

Italy's foreign minister has estimated as many as 300,000 Libyans could try to leave and could potentially end up in his country.

The result has been overcrowding at Lampedusa.

The migrant reception center there has a capacity for 800, but almost 5,000 migrants are there, IOM reported.

Laura Boldrini, spokeswoman for the United Nations' High Commissioner for Refugees in Italy, said the overcrowding is very difficult to handle.

"We are in a worst-case scenario," she said. "We have tremendous population explosion in North Africa (and the) Middle East. Two-thirds of the population is under the age of 25. At the same time, the economies are completely dysfunctional and can't provide work and opportunity."

Meanwhile, the tales of ill-fated migration attempts pile up.

In February, survivors of one trip said that they were deliberately rammed by Tunisian authorities. As many as 25 people lost their lives in the water, the survivors said. The government says all but five survived and blames the captain of the boat for the collision with the coast guard vessel.

"After the army boat hit us, our boat flipped over upside down, and I saw my friend Waleed still holding onto the sinking boat," said one of the survivors, Wissem Ben Yehyeten. "I asked him to leave the boat, but it went upside down. Everyone who held onto the boat is missing or drowned. My cousin and I got a small piece of wood, which helped us get to the army boat seven hundred meters away. The water was so cold I don't know how we made it."