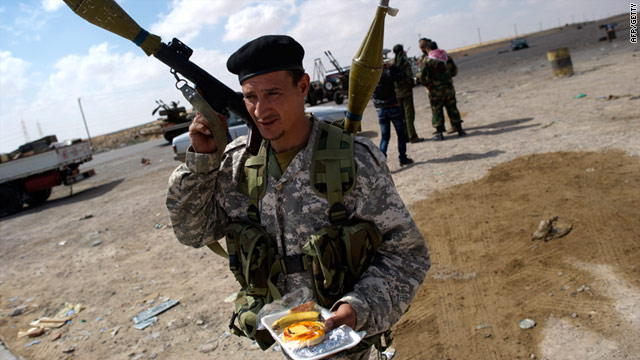 Tripoli, Libya (CNN) -- Embattled Libyan leader Moammar Gadhafi, in negotiations with the African Union, has agreed in principal to a deal that would end the conflict in the nation he's ruled for 42 years, South African President Jacob Zuma told reporters Sunday.

Negotiations remained under way Sunday night between Gadhafi and the African Union delegation.

Details of the agreement were not available, though it is believed to include an immediate ceasefire in the nearly two-month long war between Gadhafi's forces and those fighting to unseat him. In his comments, Zuma also discussed an end to NATO airstrikes aimed at enforcing a no-fly zone and targeting Gadhafi's troops.

After staying overnight in Tripoli, the African Union delegation will fly Monday to the Libyan rebel stronghold of Benghazi to meet with opposition leaders there.

Gadhafi has been a strong supporter of the African Union and has channeled large sums of money its way. Libya also holds a seat on the 15-member Peace and Security Council. As such, opposition leaders have voiced skepticism that mediation would end the conflict in a way that would satisfy their goals, which include Gadhafi's ouster.

The African Union's special committee on Libya is represented by Mauritania, the Democratic Republic of Congo, Mali, Uganda as well as Zuma's South Africa.

As Gadhafi left one meeting at his compound in Tripoli, he made a rare public appearance for international media before riding off in a car as he waved to supporters near his tent. The leader then entered a second meeting with the delegation.

Earlier Sunday, Mauritanian President Mohamed Ould Abdel Aziz told journalists that the meetings "will discuss the ways to resolve the crisis in Libya, and our main goal is to stop the military operations and find adequate solutions for the problem between our Libyan brothers," according to a Mauritanian news agency.

After a series of setbacks driven by the advances of pro-government forces, Libyan rebel fighters this weekend recaptured the besieged city of Ajdabiya after apparently holding off Gadhafi's better-equipped forces.

In a hospital, witnesses told CNN on Saturday that three of Gadhafi's fighters who were killed were carrying identification cards from Syria, Algeria and Chad.

Meanwhile, in Misrata, NATO airstrikes hit parts of the city overnight and Sunday, an eyewitness told CNN, who did not want to be named for security reasons. At least eight people were killed and 22 injured from Saturday's fighting between the pro-Gadhafi forces and the rebels, according to medical sources in the city.

On Sunday, two rebel fighters died as they attempted to hunt down pro-Gadhafi snipers near the city center, another eyewitness said. The rebels were able to recover the bodies of 15 such snipers shot earlier Sunday. The snipers took positions on top of residential and commercial buildings, the eyewitness said.

NATO airstrikes on Sunday hit various positions in and around the city, destroying 14 tanks, the eyewitness said. Sporadic fighting continued Sunday, but had decreased from recent days as the airstrikes kept pro-Gadhafi forces busy.

Some youths, captured in recent days by rebels, said they were teenagers and secondary-school students who had been forced to leave their homes in nearby towns and villages and undergo mandatory weeklong military training before fighting in Misrata, according to the second eyewitness.

Pro-Gadhafi forces continued shelling parts of the city Sunday morning, the eyewitness said. A steel mill near the port was targeted but the port is now under rebel control, eyewitnesses said. However, the port still holds about 4,000 foreign workers who are trying to leave the city.

Civilians living in the western sections of Misrata have been forced to leave their homes and have gathered in schools and friends' and relatives' homes near the city center, eyewitnesses said.

In a statement Saturday, NATO said its aircraft destroyed pro-Gadhafi ammunition stockpiles east of Tripoli that were supplying troops shelling Misrata and other cities. The alliance also made attacks on armored vehicles near Misrata and Ajdabiya, NATO said.

"There were some 50 regime pickup trucks with machine guns and rocket launchers that attempted to enter Ajdabiya," Abdulmolah said. "The helicopters destroyed several of the trucks, and the rest took off."

Abdulmolah did not know what kind of helicopters the rebel forces used in Saturday's attack and could not confirm whether rebel forces coordinated the operation with NATO.

NATO is operating under a U.N. Security Council resolution authorizing the use of force to protect Libyan civilians from attack.

The United Nations said Secretary-General Ban Ki-moon will travel to Cairo Thursday to head meetings on Libya at the Arab League headquarters. Among the participants will be Catherine Ashton, the representative for foreign affairs and security for the European Union.

While Gadhafi has largely stayed out of the public eye in recent days, state TV aired images Saturday of the leader visiting what appeared to be a primary school in Tripoli. The anchor said the school was a target of international airstrikes and was going to be attacked.

But NATO said in its statement that Gadhafi's forces continue to use civilians as human shields.

"We have observed horrific examples of regime forces deliberately placing their weapons systems close to civilians, their homes and even their places of worship," said Lt. Gen. Charlie Bouchard, commander of NATO's Operation Unified Protector. "Troops have also been observed hiding behind women and children. This type of behavior violates the principles of international law and will not be tolerated."