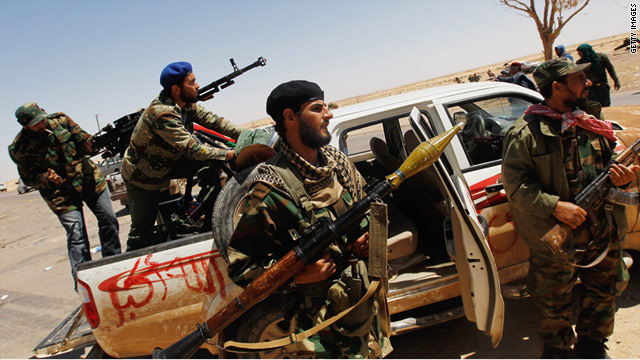 Rebels prepare to fight after hearing rumors of a Libyan army advance between Ajdabiya and al-Brega on Monday.
STORY HIGHLIGHTS

Washington (CNN) -- After weeks of U.S. and NATO bombardment, about one-third of Moammar Gadhafi's ground armor has been destroyed, as well as most of the fixed air defense sites and aircraft, but a stalemate between government and rebel forces is emerging and could last for some time, according to a senior U.S. official with direct knowledge of the latest military assessments.

The official agreed to speak Monday only on background because of the sensitive nature of the information.

The official said the latest U.S. and NATO view is that both sides essentially remain in their fixed positions -- the rebels near Ajdabiya and the pro-government forces near al-Brega.

"Neither side has the wherewithal to move," the official said.

Rebels do not have the manpower, vehicles or weapons to make major advances. And while Gadhafi's forces continue their attacks, especially in Misrata, the source said they are suffering from a lack of supplies, ammunition and fuel because of airstrikes. The official said that a major ground force movement would put Gadhafi's units in the cross hairs of NATO airstrikes.

Airstrikes have rebels clinging to hope

That said, the official acknowledged strongly that the onslaught by Gadhafi forces in Misrata has put people there in a dire situation. The official described a military scenario in which the United States and NATO have direct knowledge of civilians being killed but have been unable to act because Gadhafi forces and armor are so mixed with civilian populations, it's become impossible to launch airstrikes against them.

The United States and NATO also think that Gadhafi's forces still have as many as 15,000 shoulder-fired anti-aircraft missiles, which has resulted in limited use of AC-130 aircraft, which are vulnerable to being shot down as they fly low and slow to engage in the type of precision airstrikes needed in a place like Misrata.

The attacks also have affected Gadhafi's ability to communicate with his commanders. He is still having face-to-face meetings with key associates, the official said, but is largely unable to communicate directly with units in the field. There are still some fiber-optic communications capabilities as well as communications nodes in schools and mosques that are very difficult to strike.

On the other side, another senior U.S. official who is familiar with administration contacts with the opposition said the opposition's leadership seems to be sincere and earnest about its aim of toppling Gadhafi, but the leaders are not as organized as they need to be. They lack a detailed plan.

The rebel military forces and their abilities are "still a bit of a mystery," the officials said. "... Their resources are limited and their strategies and tactics are hard to fathom."

While they are holding on to Ajdabiya for the moment, the senior official said it is hard to imagine them making any further gains toward Tripoli.