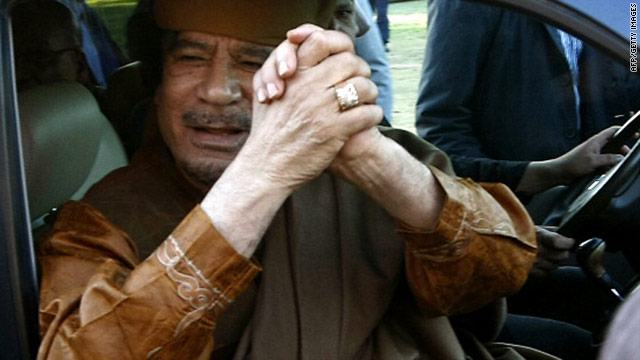 Moammar Gadhafi has agreed in principle to an African Union roadmap for peace.
STORY HIGHLIGHTS

(CNN) -- The African Union has emerged as a potential peace broker in Libya after it persuaded Moammar Gadhafi to agree to a mediation plan, but analysts say the body is unlikely to succeed unless it can overcome diplomatic disarray and distance itself from the Libyan leader.

A delegation led by South African President Jacob Zuma has been visiting Tripoli and the rebel stronghold of Benghazi, hoping to win support for an immediate cease-fire and kick-start to talks aimed at reconciling the two sides.

Although the rebels rejected the deal on Monday -- primarily because there is no mention of removing Gadhafi -- it appears as if the African Union, in getting the Libyan leader to agree to a negotiated end to the six-week old conflict, has succeeded where others, including the Arab League and the United Nations, have failed.

But, say analysts, any sense of progress is likely to be undermined by Gadhafi's close ties to the African Union, over which he once presided, and the perception that the body has already made too many diplomatic wrong turns in the crisis.

"From an African perspective, the AU has been conspicuous by its absence on the Libyan issue, so this is an attempt to at least play some sort of African hand in attempting to resolve the crisis," said South African political analyst Daniel Silke.

"I think it is something of a half-hearted attempt, perhaps too little too late."

As conflict broke out in Libya last month, the African Union prevaricated in responding to the conflict, eventually speaking out against U.N.-mandated air strikes, even as the Arab League and Gulf Cooperation Council came out in favor.

With the African Union's position muddled by member states Nigeria, Gabon and South Africa expressing support for military intervention, it stumbled again when its commission chairman, Jean Ping pulled out of a London conference on Libya's future, citing "organizational reasons."

Observers have attributed the AU's disarray to its perceived close ties to Gadhafi, who used Libya's oil wealth to help shape the 53-member grouping from the old Organization of African Unity in 2002, eventually chairing it for a year from 2009.

Likewise Gadhafi has been a major influence on individual African states, pouring investment into neighbors such as Uganda and supporting movements such as South Africa's anti-apartheid ANC during the 1970s and 80s.

"The problem with the AU is it has really acquiesced to Gadhafi for some time," added Silke. "It's given him tremendous focus within the AU, and broadly speaking in the African continent, and I think the AU finds it very difficult ... to turn its back on him."

While Gadhafi has been a significant presence within the AU, he said, its individual members aren't necessarily in thrall to the Libyan leader.

"He is fairly influential, but we must distinguish between different African capitals.

"I don't think that Gadhafi has a huge influence on Zuma. Things might be different in Uganda, but I don't think Zuma will take orders from Gadhafi to do things in the international sphere."

Nevertheless, said Handy, perceptions among Libyan rebels that Gadhafi casts a deciding vote at the AU are enough to derail any peace deal brokered by the body.

But despite the likely failure of the latest peace bid and the AU's apparent crisis of credibility, Handy said the latest developments will at least help bolster the image of South Africa's Zuma, whose government has been accused of inconsistency over its policy towards Libya.

"It probably helps Zuma's profile. Looking at South Africa, it at least gives the feeling to observers that South Africa has taken the initiative."

And, he said, the talks could prove a crucial foot in the door to further negotiations -- perhaps brokered again by the AU -- at a time that NATO air strikes have not succeeded in pushing the conflict beyond stalemate.

"It is to be expected that the mediation won't be a one-off because the rebels are unlikely to abide by this road map and there's a lot more negotiation to be done," he said.