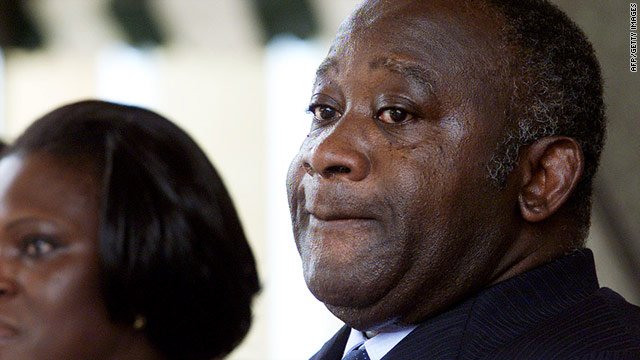 (CNN) -- Laurent Gbagbo was offered the chance to teach at Boston University in the United States if he would renounce his claim to be president of Ivory Coast and end the country's civil war, sources familiar with the negotiations told CNN Tuesday.

The United States gave permission for him to lecture at the university and teach anywhere else in the country as a visiting professor, a senior African diplomat told CNN Tuesday.

Boston University, which has a center for the study of African presidential politics, denied that it ever made an offer to give Gbagbo a position.

African Presidential Archives and Research Center "positions are designated for former heads of state that leave a country in a democratic fashion," said university spokesman Tom Testa, saying it was "never even a consideration."

But a senior American diplomat confirmed that a Boston University position had been part of the offer, and a spokesman for U.S. Senator James Inhofe, an Oklahoma Republican and friend of Gbagbo, said the State Department had asked him to ask if the self-declared president would accept a position there.

Inhofe refused, according to his communications director Jared Young.

The strongman was also promised that the International Criminal Court would not seek to charge him with crimes, and his rival Alassane Ouattara offered to form a cabinet with up to 30% of Gbagbo supporters, the African source said.

The mediator told Gbagbo his time was running out and it was the last deal he would be offered, the source said, asking not to be named discussing the details of sensitive negotiations.

Gbabgo rejected the deal, and Ivorian forces captured him Monday after French and United Nations forces pounded his stronghold over the weekend.

Gbagbo, the incumbent president had rejected the results of an election in November which international observers said former Prime Minister Ouattara won. The cocoa-producing west African nation plunged into civil war that left at least hundreds dead and tens of thousands as refugees.

Gbagbo originally brought in mercenaries from Liberia to back his bid to remain in office by force, the source said.

But Ouattara's forces succeeded in closing Ivory Coast's western border, blocking new mercenaries from getting in and stranding those who were already in Ivory Coast.

Gbagbo wanted to stay on as president, with Ouattara as prime minister in a grand coalition like the one in Kenya following a disputed election there, the African diplomat said, describing Gbagbo's position as "adamant, president or nothing."

Ouattara, whom the international community recognized as president, rejected that.

But he said Gbagbo could remain politically active if he stayed in the country -- as long as he agreed to get out of the presidential palace.

But then Gbagbo's senior generals began to abandon him, leaving him outgunned and open to attack.

By the time of the raid that captured him, he had only 200 troops left, and no properly defensible position, the source said.

The presidential residence where he was holed up didn't have a bunker, only a basement -- and that basement had no tunnel for outside access, so Gbagbo began to run out of supplies.

By the time Ouattara's forces moved in to capture the self-declared president, they could simply have thrown a grenade into Gbagbo's basement, the source said -- but Ouattara had given his troops specific instructions not to kill Gbagbo.

In the end, the Ivorians gave him an order to come out, the source said, and he did.