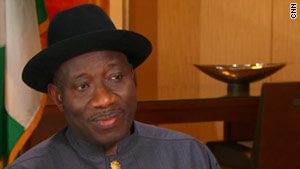 Goodluck Jonathan has led Nigeria, a nation of about 150 million in West Africa, since May.

"Goodluck E. Jonathan of PDP, having satisfied the requirements of the law and scored the highest number of votes, is hereby declared the winner," Chairman Attahiru Jega said.

He said the ruling People's Democratic Party won 22,495,187 of the 39,469,484 votes cast Saturday. That number far outstripped the votes for Muhammadu Buhari, of the Congress for Progressive Change, the main opposition party, which won 12,214,853.

To avoid a runoff, Jonathan needed at least a quarter of the vote in two-thirds of the 36 states and the capital. He won that amount in 31 states.

Only the PDP signed the results; representatives of the other parties refused to do so.

Nigeria's main opposition party, the Congress for Progressive Change, alleged that would-be voters had been intimidated and driven away from polling stations and that ballot boxes were stuffed with votes for Jonathan.

But the Nigerian observer group Project 2011 Swift Count said Sunday that, based on reports from a random sample of 1,468 polling units, it found "the country citizens were generally provided with a meaningful opportunity to exercise their right to vote and that the process improved over the National Assembly elections held last week. These elections were not without problems -- in particular, isolated incidents of intimidation, violence, and illegal voting. But these incidents did not undermine the overall credibility of the process."

Young and old hope for change

Earlier in the day, as the outcome became clear, riots erupted in cities across northern Nigeria.

Nigeria Red Cross spokesman Seyi Soremekun said that 101 people were injured in the outbreaks, which were participated in by thousands of people throughout the north -- including Kaduna city and Zaria, in Kaduna state, and Kano.

A witness in Kaduna said that a 24-hour curfew was imposed there.

In a statement, Jonathan noted "with great sadness" the news of unrest and called for calm.

"We must not allow for the loss of any life, and as I have always said, no one's political ambition is worth the blood of any Nigerian," he said.

Shehu Sani of the Civil Rights Congress said violence also erupted in Suleja, Niger state, where gunshots were heard, business owners shuttered their shops, and military were on the streets. He described the scene as "pandemonium." Citing his sources there, he said there were reports of fatalities and injuries.

Sani said youths were targeting offices and officials of the ruling People's Democratic Party, and they burned a house and a car belonging to an adviser to Vice President Namadi Sambo.

Jonathan's strength was in the south; in streets of the northern cities, rioters shouted Buhari's name.

National Emergency Management Agency spokesman Yushau Shuaib said that the protests "are neither religious nor sectional. Response and security agencies are responding swiftly to contain the situation."

On Sunday, riots occurred in Bauchi state, Adamawa state and Gombe state. A witness said tires were burned across Kano.

Nigerians voted for their president Saturday, a week after parliamentary elections were marred by violence and accusations of fraud in Africa's most populous nation. During that vote, separate bomb blasts ripped through a polling station and a collation center in northeastern Nigeria.

Jonathan's People's Democratic Party put forth a poor performance in those elections. He is popular in the Christian and animist south.

His main challenger, Buhari, is a former military ruler and was a contestant in the 2003 and 2007 elections.

Saturday's voting was largely peaceful, but Human Rights Watch estimated that at least 85 people had been killed in political violence.

A new election chief promised free and fair elections, but the electoral commission this year delayed planned elections by a week after logistical problems, including party logos missing from ballot papers, were reported nationwide.

Nigeria, Africa's most populous country and its largest oil producer, is a major supplier of crude oil to the United States, and it hosts many Western oil companies and workers.

Nigerians voted April 9 for 360 House of Representatives seats and 109 Senate seats. A gubernatorial vote will be held on April 26.