Does Libya mission need ground troops after all? 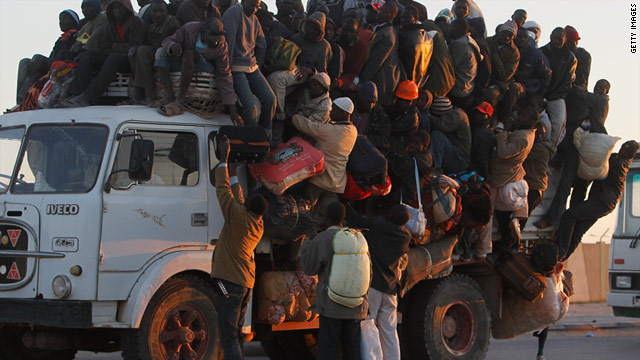 Foreign workers from other African countries scramble to board a truck trying to leave the besieged city of Misrata April 18.
STORY HIGHLIGHTS

(CNN) -- The deployment of foreign troops on the ground in Libya could boost the NATO-led mission to protect civilians, though opponents of such a scenario from within the coalition may be difficult to convince, leading analysts say.

On Tuesday the European Union revealed that it would be prepared to launch a military operation for humanitarian assistance in the war-torn North African country if it is supported by the United Nations.

The mission, featuring "definitely less than 1,000" troops, would "contribute to the safe movement and evacuation of displaced persons" and support humanitarian agencies in their activities, The Council of the European Union said in a statement.

Separately, Britain, France and Italy also confirmed they would be sending military officers to Libya to advise the rebels, though French Defense Minister Gérard Longuet ruled out sending ground troops to fight alongside them.

These developments come as Libya's main opposition body pleaded for an international military intervention. Libyans are "being slaughtered every day by the Gadhafi forces," rebel spokesman Shamsiddin Abdulmolah told CNN.

Forces loyal to the embattled Libyan leader have been shelling the rebel-held city of Misrata with artillery, resulting in the deaths of at least 27 people, according to an opposition spokesman.

The city is surrounded by Gadhafi's forces on three sides, with the port area the only lifeline for humanitarian aid -- and escape. Hundreds of migrant workers have been evacuated from the stricken city on charter boats.

According to Alexis Crow, of London-based think tank Chatham House, air power can only do so much to protect civilians on the ground in these situations.

"The examples of Mogadishu in Somalia, Rwanda, Bosnia and Kosovo will have played quite heavily in the minds of European policymakers," she told CNN.

"In trying to stop a humanitarian disaster one thing that has been learned from these experiences is that you have got to have a 'hammer and anvil strategy,' which is airpower combined with a compliment of ground troops in order to stop things like ethnic cleansing happening."

"Troops on the ground would be able to get a more accurate fix on targets and call in what is known as 'close air support.' This would make the air strikes more effective," said Paul Smyth, an ex-RAF Tornado navigator and former analyst with the Royal United Services Institute (RUSI).

While admitting his surprise that an organization he described as a little "timid" militarily had proposed the plan, he said the use of ground troops is bound to raise questions about the original UN mandate in Libya, in terms of what is or is not meant by occupying force.

"Some countries have been open in saying there should be no boots on the ground, though I think this EU force would be acceptable under the current mandate as it is not an incursion.

"But it would be interesting if they wanted to make this a permanent move in terms of creating a safe haven for carrying out humanitarian assistance. This is similar to what was created to protect the Kurds from Saddam Hussein's forces in northern Iraq in the 1990s.

"It would then become a peace enforcement operation. To do that there might be a case for underlining it with an additional mandate from the UN."

Resolution 1973 was approved by the UN Security Council in March and authorized member states "to take all necessary measures to protect civilians under threat of attack in the country, including Benghazi, while excluding a foreign occupation force of any form on any part of Libyan territory."

However the prospect of sustaining casualties on the ground from snipers or roadside bombs -- threats that cannot always be neutralized from the air -- would make governments nervous about contributing to this force, said Smyth. "So many nations appear to have gone public already, adamant that they are not putting any boots on the ground in Libya."

He said it would also be politically difficult domestically for these governments to change their mind and perform a U-turn, even if their aim is a humanitarian mission.

British Prime Minister David Cameron told Sky News over the weekend that the UN-backed mission was clear: to enforce a no-fly zone and destroy Moammar Gadhafi's ability to threaten civilians.

"We are very clear we must stick to the terms of the UN Security Council resolution. We must keep the support of the Arab world and I think that is very important to make sure this is done the right way," he said.

Crow said the EU plan was also constrained by two things: the burden of responsibility and time.

"It's the age-old question of burden sharing," she said. "Who supplies the troops? And if you're sending them using the term 'humanitarian assistance,' how long do you give it?

"There is no stomach for long-term campaigns among the voting public in coalition countries. It could easily turn into a conflict resolution or stabilization mission as the line between objectives becomes blurred. If this is the case, how long do you leave troops there? This makes me nervous."