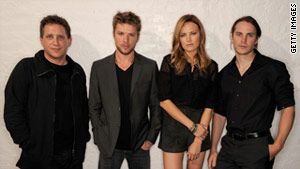 Editor's note: CNN's Tom Cohen was based in South Africa from 1990-1998 for The Associated Press and worked with Greg Marinovich and Joao Silva. He covered many of the events depicted in the book "The Bang Bang Club" and the film.

(CNN) -- In the opening scene of Steven Silver's ambitious but flawed "The Bang Bang Club" -- a film based on the book of the same title -- an interviewer asks doomed photographer Kevin Carter what makes a good picture.

That inability to articulate the qualities that measure success for a photojournalist are at the heart of both the book by Greg Marinovich and Joao Silva as well as the film, which was released last week to a limited number of theaters in the U.S.

The story behind 'The Bang Bang Club'

The book, which is being reissued 11 years after its original publication to coincide with the film's distribution, is an honest account of four South African photographers who confront personal risk, tragedy and their own humanity to chronicle the chaotic township violence of the final years of apartheid.

Silver's film painstakingly recreates the drama and the sights and sounds of what those photographers experienced, with scenes arranged to duplicate their images published around the world.

However, the South African-born writer and director's effort to create a film narrative out of a nonfiction book distorts crucial characters and events. 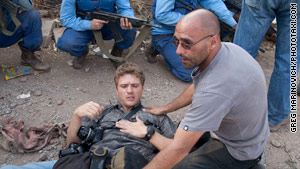 Photographer Joao Silva, on the set of "The Bang Bang Club," assists Phillippe, who plays Greg Marinovich in the film.

In a telephone interview a week before the film's U.S. premiere Thursday at New York's Tribeca Film Festival, Silver acknowledged the difficulty he faced.

"When you're adapting a true story into narrative fiction, there are enormous challenges in trying to decide in how far to go from what actually happened," the prize-winning documentary filmmaker said of his first dramatic feature.

"The danger is you're going to make a very accurate film that nobody will ever see."

Through multiple rewrites, he said, "there were many discussions about where we could divert from the truth."

"As a documentary filmmaker, this is not a conversation that is familiar to me."

The result shows that unfamiliarity.

An opening credit sets the context of the film's driving dynamic -- chronic political violence between supporters of the African National Congress and the Zulu nationalist Inkatha Freedom Party, which was covertly aided by the last white-led South African government.

After that, Silver relies more on nuance and subtle references to fill in the blanks.

"It was important to me that the story was not about apartheid, not about South Africa," he said. "It was about four young white men ... and the choices they made."

There is no back story provided on what draws the photographers together beyond their desire to chronicle the conflict erupting in townships around Johannesburg.

To Silver, part of the problem was the real characters involved.

Phillippe on 'The Bang Bang Club'

"One lesson I've taken from 'The Bang Bang Club' is don't make films about journalists," Silver said. "They present themselves as good subjects for film, but they're not. ... They don't necessarily have stakes in the stories they are covering."

That's why he said he had to fictionalize aspects of the story and the characters to make the film work.

"You face a difficult challenge, which is: How do you tell their story, which is in part the story you're covering, without getting too lost in it?" Silver explained.

Overall, the film captures the look, sound and feel of the township clashes as well as the swagger of the journalists who ventured in to chronicle the mayhem.

"What's the weather forecast?" asks Silva's character about the prospects for violence on a particular morning.

The Zulu impis beat their shields with sticks and sing war songs in deep harmonies, and the opposing ANC comrades pile up burning tires as barricades and hurl bricks and stones.

Killings are graphic and matter-of-fact -- we hear the machetes hacking bodies and see blood explode from gunshots.

In the end, though, some of Silver's narrative choices in telling the story discredit the authenticity he sought.

He has the four photographers all working for one newspaper, The Star in Johannesburg, as either staffers or free-lancers on a day rate.

They go to the same events together to take competing photos, which anyone familiar with journalism knows would never happen.

In addition, there is no depiction or direct mention of the so-called Third Force of government security agents instigating the violence.

Silver cited a handful of subtle references to the Third Force but conceded it was "not developed into a character."

Otherwise, "the narrative then would demand that they (the photographers) have some kind of effect on the Third Force," Silver said. "The one thing I was committed to was to not have them take a photograph that stopped apartheid singlehandedly."

Silver also devotes a long early scene to introduce Inkatha -- with authentic Zulu characters, language and action -- to provide the group's perspective for opposing the ANC.

There is no similar scene on the ANC perspective, which Silver said was deliberate.

"It is all there but in a more cinematic rather than journalistic rendering," he said.

"The essence or 'important thing' about the ANC's side is liberation, the desire to be free, and the casualties, the suffering they endure in this battle. This is all over the film."

The most egregious shortcoming is the depiction of Abdul Shariff, a 31-year-old photographer killed in a township battle in January 1994.

Shariff was a free-lancer with a reputation for quiet professionalism who was building a portfolio on apartheid South Africa.

He wound up in the crossfire of an unexpected gunbattle during a visit by top ANC leaders to Katlehong township.

In the film, his character is portrayed as an inexperienced Bang Bang Club wannabe who begs Marinovich's character to let him join, repeatedly calling him "sir" and gesturing submissively in appreciation when told to come out with them the next day.

Silver continues the fictional portrayal of Shariff in the ensuing scene, having him shot instantly for failing to take cover from gunfire in a graveyard in Soweto township.

Asked to explain the demeaning portrayal of a real person, Silver said the character blended different elements important to the film -- young photographers seeking to join the Bang Bang Club, and the death of "one of their own" to add an element of complicity in their work.

He also said Shariff's family requested the inclusion of his character but acknowledged he didn't personally take part in the conversation and was unaware if the family knew how Abdul would be depicted.

Cassim Shariff -- Abdul's brother -- said he signed a consent form for Abdul's name to be used but added he thought it was only to depict the actual death scene.

He denied that the family sought for Abdul to be included, saying: "We never asked for anything."

Without having seen the film, Cassim Shariff was unwilling to comment on the portrayal of his brother.

To Silver, it all comes down to the necessary dramatic license to tell the story properly, claiming what he called a "privileged relationship with the truth."

"What was important to me was that the film be true to the story itself and the story it was trying to tell," Silver said.

In this case, the film is Silver's version of the story rather than the truth of the book.