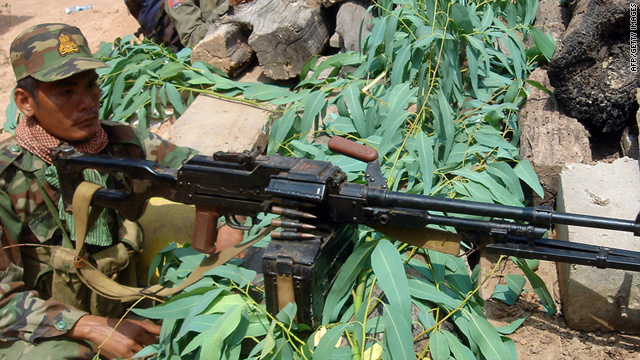 Bangkok, Thailand (CNN) -- Thai and Cambodian troops exchanged gunfire near a disputed temple Saturday despite a cease-fire agreement between the two nations.

Fighting may be a result of Cambodian soldiers not being aware of the cease-fire set Thursday, the spokesman said.

It should cease once Cambodian soldiers in the conflict area learn about the truce, he said.

Cambodia's government spokesman could not be reached for comment.

Fighting along the turbulent border has raged since April 22 as the two sides accuse each other of trying to seize ancient temples. Thailand calls the temples Ta Kwai and Ta Muen, while Cambodia calls them Ta Krabey and Ta Moan.

Much of the border between the two countries remains in dispute.