Exodus of Libyans to Tunisia resumes 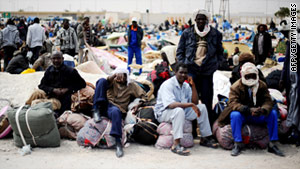 Refugees from Libya continue to pour into Tunisia to escape the fighting between rebels and pro-government forces.
STORY HIGHLIGHTS
RELATED TOPICS

(CNN) -- More than 8,000 people -- most of them women and children -- fled into Tunisia during the weekend to escape fighting between Libyan government troops and opposition forces, the U.N. High Commissioner on Refugees said Tuesday.

The refugees arriving in Dehiba, in southern Tunisia, are predominantly from ethnic Berber tribes that have long been persecuted by Libyan leader Moammar Gadhafi, a spokesperson for the U.N. aid agency said.

Nearly 40,000 Libyans have fled the country's western mountainous region in the past month as pro-Gadhafi and opposition forces have fought for control of the border crossing point, according to the U.N.

UNHCR staff in Dehiba said the situation of the refugees was being made worse by a violent sandstorm that has battered the area. Hundreds of tents and two huge portable warehouses, set up in an effort to accommodate the exodus, were destroyed.

Opposition forces continue to have control of the border crossing despite fighting that has spilled into Tunisian territory, the agency spokesperson said, adding that UNHCR will give tents to Tunisian authorities, which they can distribute to residents of Dehiba should they need to relocate farther from any further border skirmishes.

Most of the Libyan refugees are arriving in Tunisia in tribal groups. Many are choosing to stay in the camps for a few days before moving on to stay with Tunisian families. UNHCR, and partners, including the World Food Programme and other agencies, are planning to distribute food and relief items to the refugees and their host families.

The situation in Libya has become increasingly precarious for civilians and migrant workers, who have been caught in the crossfire of the conflict that has killed tens of thousands and left thousands more wounded since it began two months ago.

More than 550,000 people, mostly migrant workers, have fled Libya for neighboring countries. It has been difficult to track the exact number of Libyans who have fled, because few have claimed asylum, UNHCR has said.

The agency said that there have been more than 8,000 "irregular arrivals" on Italian territory from Libya since March 26. Another 1,132 people have arrived in Malta on boats from Libya since mid-April.