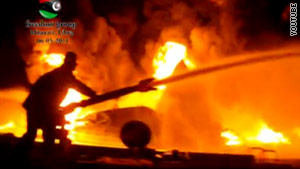 Libyan rebel fighters attempt to put out a fire Saturday at a fuel depot in Misrata.
STORY HIGHLIGHTS

Meanwhile, in the de facto rebel capital, Benghazi, the Libyan opposition said Italy has agreed to arm the rebels.

The Italian Foreign Ministry categorically denied it will send weapons to Libya. A press office spokesman said Italy will only go as far as sending non-lethal weapons such as satellite and radar systems to aid the rebels.

The rebels, intent on winning on the ground without foreign troops, have been asking for arms supplies as a grinding war rages in cities like Misrata.

The fuel depots were located 2 kilometers from the port. The oil stored there was used for electricity and generator plants.

"We lost a lot of fuel which is used for the daily life of the city," Hassan said.

Misrata, the only city in western Libya held by the rebels, has been the scene of heavy fighting for weeks as Gadhafi's forces try to reclaim control.

The international community has accused Gadhafi of attacking his own citizens and NATO took control of airstrikes in late March to protect Libyans.

NATO said it struck ammunition facilities in the Misrata area Friday as well as other military targets in Tripoli, Zintan, Mizdah, Sirte, Ras Lanuf and al-Brega.

As time wears on, human rights groups have expressed increasing concern for besieged Libyans in Misrata.

A report issued by the monitoring group accused pro-Gadhafi forces of the "unlawful killing of civilians due to indiscriminate attacks, including use of heavy artillery, rockets and cluster bombs in civilian areas and sniper fire against residents."

It also documented "systematic shooting at peaceful protesters and enforced disappearance of perceived opponents, which can amount to crimes against humanity."

The scale of the relentless attacks that we have seen by Gadhafi forces to intimidate the residents of Misrata for more than two months is truly horrifying," said Donatella Rovera, Amnesty International's senior adviser who is currently in Libya.