By Ian Lee, Special to CNN 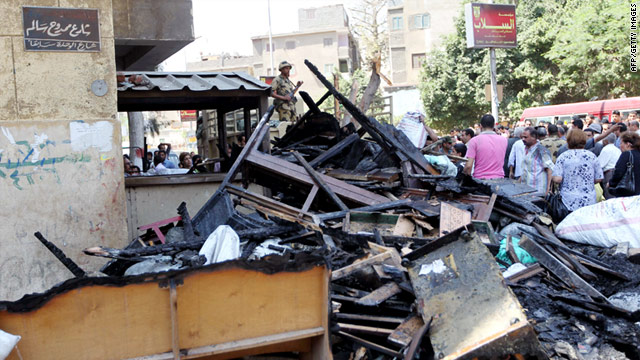 Christians remove objects from a burned church in the working-class neighborhood of Imbaba in Cairo on May 8.
STORY HIGHLIGHTS

Editor's note: Ian Lee is a freelance reporter who was at the scene of sectarian tension in Cairo, Egypt, during the weekend, which resulted in more than 10 deaths and scores of injuries.

It was an ominous warning from residents of Imbaba, a lower-income Cairo neighborhood. Three freelance journalists and I were responding to a report that 500 Salafists, ultraconservative Muslims, were clashing with Christians near a local church. Imbaba is a sprawling community, home to more than a million working-class residents living in rundown buildings next to uneven roads.

We entered onto those narrow streets by taxi. We'd end up leaving on foot, running for our lives.

This night, the Salafists claimed to be trying to retrieve a woman locked inside St. Mena Church who converted from Christianity to Islam. In the ensuing clashes, more than 10 people died and more than 100 others were injured.

A certain level of tension has always existed between parts of Egypt's Muslim and Christian communities. Tonight, we were witnessing a culmination of those tensions.

During the revolution, crowds quickly and violently turned on journalists; most notable was the savage assault of CBS correspondent Lara Logan in Tahrir Square in February. This incident highlighted the new dangers foreign journalists face while reporting in Egypt since state TV blamed foreigners during the revolution for the country's problems.

As we arrived within a couple hundred yards of the church, now deep inside the neighborhood, we saw a large crowd of men and young boys milling around in the street leading to the church.

To avoid a repeat of such attacks against journalists, we heeded locals' warnings, which came in the form of helpful advice from some and overt threats by others to stay put. We kept our cameras in our bags to avoid attracting even more attention, and stopped at a small cafe to survey the scene from a distance.

There was the sound of occasional gunfire and the smell of smoke filling the air, while we debated whether to advance. A convoy of large, green police vehicles and ambulances gave a glimmer of hope that some security would be restored, in turn making it safe to report. But as we stepped back onto the street, some in the crowd started to grow hostile to our presence as both journalists and foreigners.

We decided not to advance any farther and turned around to leave. We walked quickly from the scene. This is when some in the crowd began to turn on us.

One man started screaming "get out," attracting uninvited attention. A couple of men grabbed two of the reporters' bags. We eventually broke free and quickly moved down the street.

Fortunately, a few locals came to our rescue, escorting us out of the area. Their kindness might have saved our lives.

We were ushered into a tuk-tuk, a small, three-wheeled motorbike taxi, and despite the mob surrounding us, we were able to drive away. Two local men hung onto the side, protecting us from the surging crowd.

We hurtled down the street as rocks pelted the back of our vehicle. It seemed as though we'd escaped. We made it to a busier road, still miles from safety, when the situation got worse.

Another mob formed, this time stealing a colleague's camera. After breaking free, we ran down the street in a dead sprint. Gunfire rang out again. We weren't sure where it was coming from or where it was directed, but it didn't matter. Our hope of escaping unharmed was dwindling.

During the ruckus, one of the other journalists went missing. With the angry pack gaining ground, another decided to go back and look for him. The mob had grown larger and louder with some wielding sticks and knives. Seeing them approaching and the sound of gunfire once again ringing out, the remaining journalist and I again started sprinting down the street.

With the wall of people gaining ground, the thought of dying crossed our minds, as we frantically searched for an empty taxi. Finally, we jumped onto an empty microbus, offering the man 100 Egyptian pounds, roughly $17, to speed away.

In the microbus, we took stock of the situation: Two of our colleagues were now missing. We feared the worst.

The bus driver, sensing our desperation, demanded the money up front, or he wouldn't drive any farther. I gave him 50 pounds on the spot and promised him the rest when the ride was over -- but he eventually stopped again and refused to go any farther.

Leaving the bus, we finally found a taxi and made a break for safety. We contacted the U.S. Embassy to report the missing journalists, but as it turned out, they also had escaped. Fortunately, they would reappear later.

One actually ran out ahead of us and made it to safety sooner. Another ducked into a side street, as the mob pursued the fourth journalist and myself. It turns out we'd been the decoys.

This incident shows how the reporting scene in Cairo has changed during Egypt's political transition. Before the revolution, reporters had to dodge the authorities. Now we dodge angry mobs as Egypt tries to restore stability.