NATO leader: 'Gadhafi's time is over' 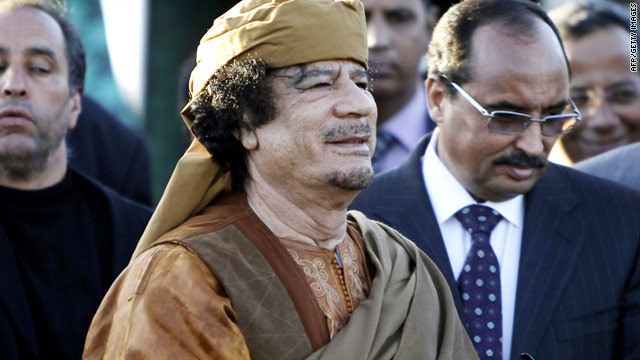 Libyan leader Moamer Kadhafi stands outside a tent erected at his Bab al-Aziziya residence in Tripoli on April 10, 2011.
STORY HIGHLIGHTS

"The game is over for Gadhafi," NATO's Secretary-General Anders Fogh Rasmussen told CNN's "State of the Union." "He should realize sooner rather than later that there's no future for him or his regime."

NATO's Anders Fogh Rasmussen on the endgame in Libya

Rasmussen, a former Danish prime minister, believes Gadhafi will be ushered out of power amid the "wind of change" sweeping across North Africa and the Middle East, and the dramatic military strides in Afghanistan and Pakistan.

"This week we have seen a major blow to al Qaeda and Osama bin Laden's evil vision of conflict as a means to create conflict between the Muslim world and the rest of the world. And in Afghanistan, the Taliban is under pressure everywhere, so basically I am very optimistic," he said, making reference to the killing of bin Laden by U.S. Navy SEALs on Monday in Pakistan.

The alliance has been carrying out a U.N. Security Council resolution calling for the protection of civilians from the Gadhafi regime by any means necessary, and since March 31, its planes have been pounding targets across the country.

According to NATO's latest daily operational update, NATO planes struck several targets on Sunday, including an ammunition storage site in the Zintan region, tanks in Misrata and Ajdabiya, military vehicles in al-Brega, and headquarters compound buildings and ammunition and vehicle storage facilities in Hun, south of Sirte.

There have been widespread assumptions among experts that the conflict between pro- and anti-Gadhafi forces will continue to be a stalemate for some time. Rasmussen was asked when the NATO operation would be completed but all he could say was "it needs an end of the mission."

"We have defined three very clear military objectives," he said. "Firstly, a complete end to all attacks against civilians. Secondly, a free and unhindered and immediate access for humanitarian assistance. And thirdly, a withdrawal of Gadhafi military forces and paramilitary forces to their bases and barracks. When these objectives are fulfilled, our mission is accomplished."

He said "it's hard to imagine" that the "outrageous and systematic attacks" by pro-Gadhafi forces against Libyans will halt as along as Gadhafi stays in power.

He said there needs to be a political and not a military solution with a "peaceful transition to democracy" as Gadhafi leaves power.

But the conflict rages on. The Tunisian state news-agency reported on Sunday that 50 people were injured when government forces and rebels clashed near the Tunisian-Libyan border on Saturday.

Meanwhile, in the de facto rebel capital, Benghazi, the Libyan opposition said Saturday that Italy has agreed to arm the rebels.

The Italian Foreign Ministry categorically denied it will send weapons to Libya. A press office spokesman said Italy will only go as far as sending non-lethal weapons such as satellite and radar systems to aid the rebels.

The rebels, intent on winning on the ground without foreign troops, have been asking for arms supplies as the war rages in cities like Misrata.