Father of alleged Libyan rape victim says she is in Qatar 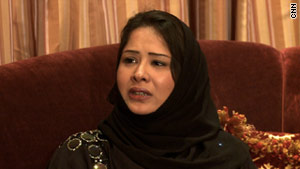 (CNN) -- The father of the woman who was dragged away by officials loyal to Libyan leader Moammar Gadhafi after telling journalists that some of his troops had beaten and raped her said Monday that his daughter is in Qatar.

Eman al-Obeidy, who garnered worldwide attention for her vocal allegations against Gadhafi's regime, had told CNN she fled Libya, fearing for her safety.

Her father declined to provide further details about her whereabouts, but said he spoke to her Monday and she told him she is in Qatar.

Al-Obeidy told CNN in a previous interview that she crossed into Tunisia on Thursday with the help of a defecting military officer and his family.

She said she left Tripoli in a military car, wearing a head cover that hid everything except one eye.

Al-Obeidy said she entered at the Dahibah border crossing disguised "in the local manner" and was not challenged. She described the trip from Tripoli as "very tiring."

Along the road to Tunisia, the car she was in was stopped several times at checkpoints, al-Obeidy said. The military officer would show his permit and they would be allowed to continue, she said.

Al-Obeidy said she was able to make the crossing by using a refugee document.

European diplomats drove her from the border region to Tunis, and gave her sanctuary there while she considered her future, according to Western diplomatic sources.

She said she was afraid she was being followed and might still be in danger, adding that she hoped she could obtain protection from a Western government.

"I still do not know what I am going to do. Of course I'd like to see my family," she said, speaking in Tunisia.

Al-Obeidy's mother learned about her daughter's escape after seeing news reports on TV, her father told CNN from the family's hometown of Tobruk, Libya, on Sunday. Atiq Al-Obeidy said that his wife then called him, and both parents were overjoyed.

Atiq Al-Obeidy admitted he was "not optimistic" that his daughter would be able to safely leave Libya, thinking forces loyal to Gadhafi "would do the worst to her, given his past."

"I am extremely delighted, and I will be looking forward to more information about how she was able to escape," the woman's father said Sunday.

Eman al-Obeidy received worldwide attention on March 26, when she burst into the Rixos Hotel in Tripoli while international journalists staying there were having breakfast. She told reporters she had been taken from a checkpoint east of Tripoli and held against her will for two days while being beaten and raped by 15 men.

In an interview with CNN last month, she said she felt defeated and lived in fear that she would be punished gravely for her words.

"I usually get harassed when I have to show my Identification card to government officials somewhere and they find out who I am and that I have put complaints forward against Gadhafi's people," she said. "They humiliate me to the point where other people gather around and start saying that it is shameful to treat a Libyan woman that way."

The legal proceedings in her rape case have not gone far, she said last month. She also had not been able to go home.