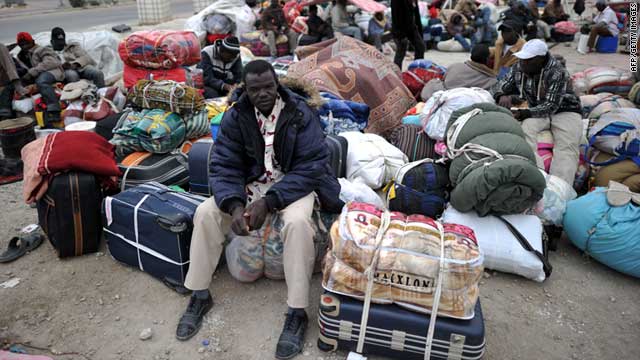 West African refugees wait to be evacuated near the port of Misrata, Libya, on April 30, 2011.
STORY HIGHLIGHTS

He boarded a boat bound for Italy last month, only to see it sink April 26.

The next week he climbed aboard another ship. That boat capsized in Tripoli's harbor Friday. Abdi survived that wreck as well.

But he is one of very few lucky ones.

Hundreds -- possibly thousands -- of African migrants have drowned or disappeared at sea trying to flee Libya for Europe in overcrowded boats that are not seaworthy, reports from refugee agencies suggest.

Hundreds of people are missing after the ship Abdi was on went down last Friday, while 250 people died in a shipwreck at the beginning of April, and two boats with 480 people between them have simply vanished, the United Nations High Commissioner for Refugees said.

UNCHR is "actively discouraging" migrants from boarding boats for Europe, Melissa Fleming, a spokeswoman for the agency, said Tuesday.

The agency is "stressing the perils of the journey, both inside Libya and on the Mediterranean," while urging third countries to accept refugees for resettlement.

Fifty-four Somalis trying to escape Libya are among hundreds dead or presumed dead in the shipwreck Friday, the Somali ambassador to Libya said Tuesday.

Abdelghani Mohamed Oweys said the boat that capsized off the coast of Tripoli was carrying more than 600 asylum seekers of various Arab and African nationalities -- 240 of whom were Somali.

Ibrahim Abdi, the Somali migrant who has twice tried to get to Europe, said there were 750 people on the ship that went down Friday.

Refugees who arrived on other boats the following day in Lampedusa -- an island south of mainland Italy -- reported seeing hundreds of people thrown into the water from the capsized boat, said Laura Boldrini, spokeswoman for the UNHCR in Italy.

Boldrini said 16 bodies had been pulled out of the water from the Tripoli harbor. The total number of casualties is unknown.

"From what refugees are telling us, the Libyan authorities are facilitating the departures of non-Libyan citizens from Libyan coasts," Boldrini said. "Refugees are not considered at all as humans. Trips are organized on unlikely vessels, and they leave Libya without considering the weather forecast."

The capsized boat marks the latest tragedy in the Mediterranean Sea involving refugees trying to flee the crisis in Libya.

Since the end of March, two vessels departing from Libya have disappeared -- one carrying 320 people and the other 160, Boldrini said. In addition, "We know of a shipwreck on April 4, where 250 people died," Boldrini said.

One Somali woman told the International Organization for Migration in Lampedusa that she and her 4-month-old baby were on the latest doomed boat. Having lost her baby, the woman swam to shore and boarded another boat heading to Italy, the IOM said in a statement.

Although migrants reported seeing people swimming to shore, it is not clear how many from the boat survived, the IOM said.

Oweys said passengers on the capsized boat had travelled back to Tripoli from the Shousha refugee camp near the Libya-Tunisia border to undertake the dangerous sea voyage.

Migrants said many who had been waiting on land changed their minds about making the sea journey to Italy after seeing the boat capsize, according to the IOM. But migrants claimed that Libyan soldiers and officials forced them onto a waiting boat by firing their guns indirectly.

"Although this is the first time that IOM has been told of migrants being forced by Libyan officials to get on a boat, many have told IOM that they did not have to pay for their passage to Lampedusa while others say they have paid a nominal fee," the IOM said. "However, they say that they been stripped by officials and soldiers of their savings and possessions, including mobile phones."

Since the crisis in Libya started, more than 10,371 migrants of various nationalities have arrived on Lampedusa or the neighboring island of Linosa from Libya, the IOM said. About 1,887 arrived on five boats this past weekend alone, it said.

About 29,000 migrants have arrived in Italy from north Africa since February 20, the European Union border agency Frontex told CNN Tuesday.

The majority in the past week have departed from Libya and are African, Frontex said. The agency has been interviewing them and moving them to detention centers, it added.

The IOM said it hopes to continue sea evacuations from the besieged Libyan port city of Misrata. The IOM said it has evacuated 6,263 people from Misrata to the eastern Libyan city of Benghazi, which is controlled by rebels.

But Oweys predicted more tragedies involving voyages out of Libya.

"This will happen again and again," he said. "People are getting desperate."

And Ibrahim Abdi, who has survived two shipwrecks, says he will try again rather than continuing to live in a refugee camp in Tunisia, because "even risking death is better than the way we're living now."