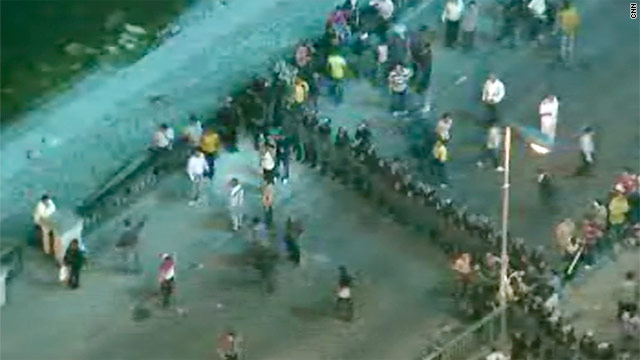 Egyptian riot police were deployed and created a human barrier between the men and the demonstrators.
STORY HIGHLIGHTS

The demonstrators initially staged a sit-in in front of the state TV building to demand greater rights for the religious minority.

Problems between Egypt's Muslim majority and its Coptic Christian minority have been on the rise in recent months, with a number of violent clashes reported between the two groups.

Dozens of unidentified men, dressed in plain clothes, began firing live ammunition into the air and attacking the demonstrators around the entrance of the sit-in enclosure with sticks and stones. They also threw Molotov cocktails. It was not immediately clear who the attackers were or what their motive was.

"They did not have beards. It was just a bunch of bad guys carrying guns and clubs," said Maged Girguis, a pro-Coptic protester.

Egyptian riot police were deployed and created a human barrier between the men and the demonstrators.

A pro-Coptic protester was hit in the head by a rock. He initially refused to enter an ambulance, saying he feared arrest by the army. Volunteer doctors attempted to treat him in a make-shift field clinic but his wounds were severe and he was eventually taken away in the ambulance.

The demonstrators captured one of their alleged attackers, who was badly beaten.

The pro-Coptic protesters broke up the sidewalk around the television station and threw chunks of rock and concrete at their attackers. The demonstrators were armed with clubs and metal chains and a man was seen carrying a sword.

Later, two groups of men were seen clashing outside the foreign ministry, which is near the TV building. It was not immediately clear whether they were the same groups that fought outside the TV station earlier, though state TV reported that Coptics were involved in the unrest.

The battling groups of men threw rocks and Molotov cocktails at each other. Black smoke billowed up from the street as cars burned outside the foreign ministry and tear gas was fired. Sporadic gunshots rang out for hours.

Clashes continued into the early morning.

Thousands of riot police and soldiers were deployed and tear gas was fired to clear the crowds. Many men fainted from the gas, while others rushed to assist them.

A man bleeding from a gunshot wound to his stomach was carried to a make-shift clinic by pro-Coptic demonstrators.

A doctor attempted to remove a pellet from another man's leg.

"I was at the front line. They were shooting from the May 15th bridge and I got hit," said Hani Salama, gasping for air.

Thousands of demonstrators chanted loudly, calling for a million-man protest outside the state TV building.

"We demand international protection. The Coptics are threatened all over Egypt," said Rafiq Hanna, a protester.

"The Egyptian government engaged in and tolerated religious freedom violations before and after President Hosni Mubarak stepped down on February 11, 2001," the commissioners wrote in the report. They cited violence toward religious minorities in Egypt, including Coptic Christians and non-majority Muslim groups.

Officials reported at least 12 people were killed and 230 injured in sectarian clashes between Muslims and Christians in the town of Imbaba in Cairo on May 7.