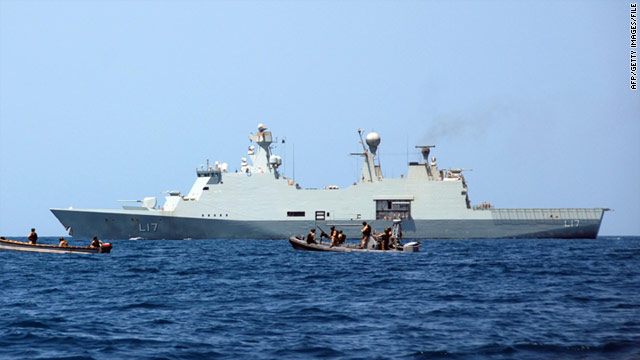 (CNN) -- After a firefight with suspected Somali pirates, Danish sailors freed 16 Iranian hostages on board an alleged mother ship, according to the Danish Royal Navy.

Four suspected pirates were killed and 10 wounded during the firefight Thursday, the Royal Navy said on its website. No one on board the Danish ship Esbern Snare was hurt, and the hostages were also not injured.

After the firefight, the crew could see weapons being thrown overboard from the suspected mother ship, and "there were signs of the pirates surrendering," the statement said. The crew then took control of the ship.

Sixteen hostages and 28 suspected pirates were on board, along with several weapons and some equipment, the Navy said. Four pirates had been killed and 10 wounded in the firefight, while 14 others were unharmed, said the statement.

The 10 injured were being treated onboard the Esbern Snare, the Royal Navy said. The four suspected pirates who were killed were buried at sea "in accordance with NATO procedures with regards to Muslim traditions."

The 16 Iranians "can look forward to a quick reunion with their respective families," according to the statement.

All the suspected pirates were being held onboard the Esbern Snare while Danish authorities looked into possible prosecution, the Navy said.