Disabled swim star who wouldn't give up Olympic dream 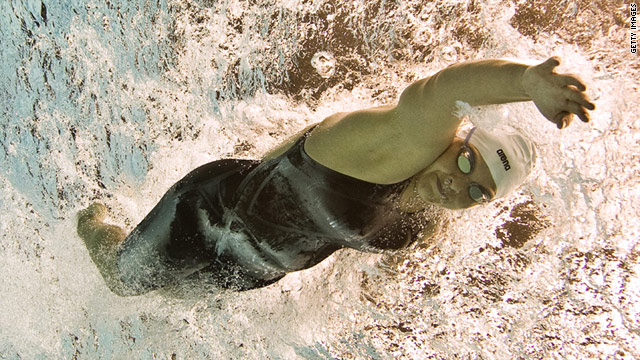 (CNN) -- A horrific motor accident led to the partial amputation of one of her legs but that was never enough to stop South African swimming heroine Natalie du Toit from realizing her ambitions.

Possessed of natural talent, du Toit had dreamed of competing in the Olympics ever since she was a little girl.

Her rise to athletic stardom began in 1998, when she represented South Africa at the Commonwealth Games at the age of just 14.

But three years later, du Toit's Olympic dream seemed to shatter when she was hit by a car while riding her scooter. The collision led to the amputation of du Toit's left leg at the knee.

However, the accident did little to sink her ambitions. Even as she lay in hospital, the then 17-year-old swimmer refused to give up on her dream.

Natalie du Toit refusing to give up

"My parents and a couple of friends kept saying that I was pulling myself up on those triangles that are above the bed, saying that I need to keep training, because my Olympic trials are coming up," recalls du Toit.

"Back in my mind I never ever wanted to give up swimming, it was something that I would carry on with," she says.

Imbued with unrelenting spirit, du Toit refused to allow an amputation to deter her from her plans.

After spending several months in physical training she returned to competitions and in 2004 -- just three years after her accident -- she won five gold medals at the Paralympic Games in Athens.

She finally realized her ultimate goal in 2008 in Beijing, when she made history by becoming the first female amputee swimmer ever to qualify for the able-bodied Olympics.

"Qualifying for the Olympic Games was one of those moments where you just cry because it was like you've climbed Mount Everest," says du Toit.

"It kind of feels like the end of the world almost," she adds. "It's a sigh of relief, it's all the hard work, it's everything that everybody believed I could do."

She completed her race finishing 16th out of 24 in the 10,000 meter swim and returned back to South Africa, disappointed in her performance.

In the same year, she won another five gold medals at the Paralympics, marking an amazing comeback for an unyielding athlete determined to follow her dream.

Her unique achievements have turned du Toit into an inspirational figure for many in South Africa and beyond.

Among the first people to recognize her feats was Nelson Mandela, while former South African president Thabo Mbeki praised her for being an inspiration to the nation

And last year, the marathon swimmer was recognized at the Laureus awards for "breaking down the barriers between disabled and able-bodied sport."

It's all a far cry from her first moments back into the swimming pool after her accident.

If you swim able-bodied, nobody says: 'Ah, she has half a leg we're going to go slower against her.'
--Natalie du Toit, swimmer
RELATED TOPICS

"I still remembered how to swim, but it was weird doing a tumble turn and only having one leg," du Toit recalls.

Du Toit says she doesn't see herself as a disabled swimmer. "It's quite a tough thing, because if you swim able-bodied, nobody says: 'Ah, she has half a leg we're going to go slower against her,' -- nobody."

Nowadays, Du Toit is preparing for the London 2012 Games, where she says she's going to perform for the last time on the world stage.

But even though she might be preparing to retire, du Toit is not short of ambition. She's targeting another Olympics qualification and wants to win all seven races at the Paralympics in order "go out with a bang."

"I've come to realize that it's important to share knowledge and it's something that I will carry with me for the rest of my life -- to see the youngsters, to see the learning instructors trying to teach these kids how to swim," says du Toit.

"We have kids that drown in a little bucket of water that's under a tap, and it's more the education that we are trying to get out there," she adds.

"That's what is important, to pass on those messages, and for people to actually take them up and use them every day."