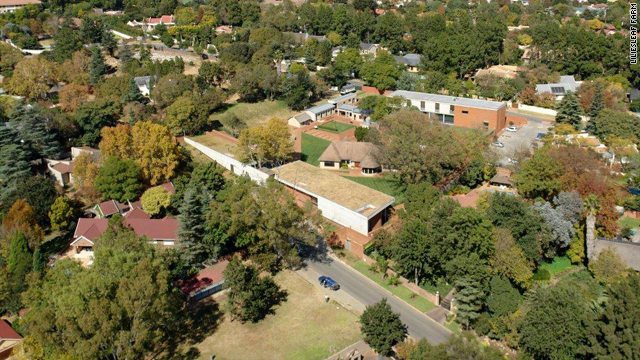 A gun belonging to Nelson Mandela is believed to be buried under this sprawling land, which served as his former hideout and is now a residential area.
STORY HIGHLIGHTS
RELATED TOPICS

(CNN) -- As a young freedom fighter, Nelson Mandela stepped out of a farmhouse hideout in South Africa, took 20 strides and dug a hole on the sprawling land.

He leaned over, put in a semiautomatic pistol and 200 rounds of ammunition, and carefully put a khaki uniform over them.

After covering them with heaps of soil, he sauntered back into his rural hideout in northern Johannesburg -- hoping to retrieve them soon.

He never got a chance to fire a shot with the Makarov pistol. A few weeks after he buried it at the farm in Rivonia, he was hurled into prison for the next 27 years.

That was in 1962, and the whereabouts of the gun -- now estimated at $3 million -- remain a mystery, said Nicholas Wolpe, the chief executive of Liliesleaf Farm, the former hideout now converted into a museum.

A scramble to find the gun has sparked a frenzy among collectors, historians and Mandela fans.

'It's interesting how we came to find out about the gun," Wolpe said. "Mandela visited Liliesleaf in 2003, and as we were walking around, he turned to me and asked, 'By the way, did you find my gun?"

Wolpe said he was stunned.

Mandela then asked him to pinpoint where the main kitchen once stood.

During the visit, the two tried to retrace his steps using the paces as a guide, but the farm had undergone some changes, making it hard to determine the original location of the kitchen with certainty.

Wolpe later realized that the former South African president had talked about the gun during an interview with a journalist in the 1990s right after he was freed from prison.

During the interview, Mandela indicated that he buried the pistol, ammunition and the uniform at the site in case there was a raid at the house, according to Wolpe.

Mandela and the military wing of the African National Congress used the secret location -- now Liliesleaf Farm -- to plan the toppling of the South African apartheid government.

It is the first gun Mandela owned and the first weapon linked to the anti-apartheid fight in South Africa, Wolpe said.

The gun was a gift by Ethiopian Col. General Biru Tadesse, whom Mandela visited in the early 1960s for military advice on fighting apartheid.

Despite its hefty price tag, Wolpe hastily makes it clear that it's not about the money or glorifying violence.

"It is all about the historical significance of the gun and who it belongs to," Wolpe said. "The 1960s were a defining moment in South Africa's struggle ... The gun has a special link to a very significant period and epoch to our liberation struggle."

A scramble to find the gun has prompted Wolpe to take extreme measures.

He hired searchers to demolish a home on Liliesleaf's property, carefully ripping up chunks of concrete and turning over a yard to find it.

He also dispatched military experts to try and pinpoint its exact location based on Mandela's information. His trust owns about five acres of the original 20-acre hideout.

"The expert identified three possible locations, two of which are on our site," Wolpe said.

The third location is on neighboring property, which was put up for auction last week. Historians, collectors and potential international bidders were among the 400 people who participated.

Despite the frenzy surrounding the potential site of the gun, the property worth about $350,000 did not sell.

"I'm still shocked, I don't understand why it did not sell," said lead auctioneer Joff van Reenen, who speculated that potential buyers may have been scared off by the publicity surrounding the gun.

Unlike Wolpe, the owner of the neighboring property did not make an effort to find the gun. The property includes a modern Spanish-style house, under which the military expert believes is the potential third location of the gun.

And the mystery continues as both Wolpe and the owner of the neighboring home hope the gun is on their land.

"Obviously, it would be totally inappropriate to ask him for help now," Wolpe said of the ailing 92-year-old Mandela. "And there is no new information he can give us that would make finding it easier."