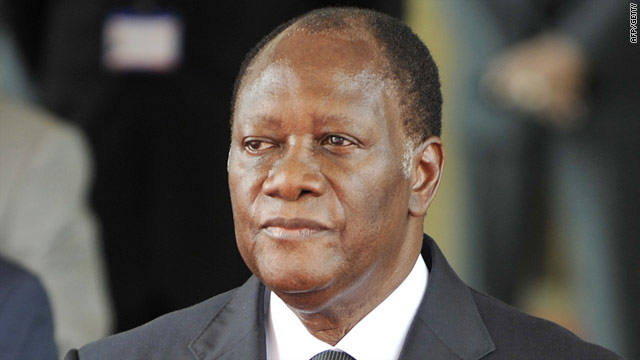 (CNN) -- The president of the Ivory Coast is urging the International Criminal Court to investigate major crimes committed in his country after a disputed November election sparked a political standoff that left hundreds dead.

In a letter posted on the court's website Wednesday, President Alassane Ouattara asked for an "independent and impartial investigations into the most serious crimes committed" after the presidential poll.

Ouattara has been in power since the April arrest of incumbent leader Laurent Gbagbo, who defied international calls to step down after he lost the election. Hundreds died in the ensuing standoff, according to rights groups.

Human rights investigators said this month that they have found a total of 10 mass graves near the commercial capital of Abidjan.

Human Rights Watch has said forces loyal to both leaders killed or raped citizens, burned homes and kidnapped civilians during the standoff.

The president asked the international court to ensure those with the "greatest criminal responsibility" for the crimes are brought to justice. He made the request in a letter to Prosecutor Luis Moreno-Ocampo this month, the court said.

Perpetrators will be brought to justice, according to the international court based in The Hague, Netherlands.

"Since the upsurge of violence following the second-round of the presidential election ... the office of the prosecutor has carefully examined all crime allegations and repeatedly reminded the political and military leaders of Cote d'Ivoire that the most serious crimes falling under the court's jurisdiction will not remain unpunished," the court said in a statement.

On Monday, the criminal court sought the arrest of Libyan leader Moammar Gadhafi and two relatives, linking them to "widespread and systematic" attacks on civilians as they struggle to hold power in the North African nation.

And the court has accused two prominent Kenyan politicians -- Deputy Prime Minister Uhuru Kenyatta and member of Parliament William Ruto -- and four others of multiple counts of crimes against humanity for the bloody post-election violence that wracked Kenya in late 2007 and early 2008.