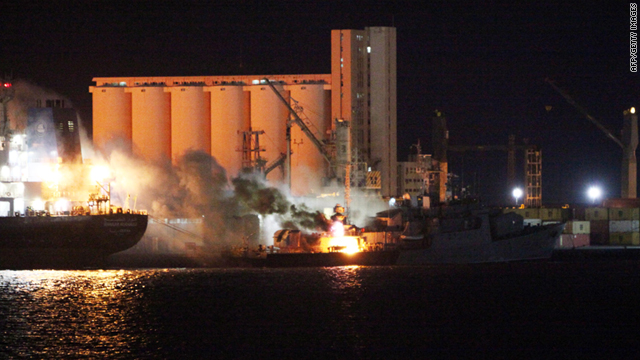 Smoke rises from a fire on a boat on Thursday in Tripoli after NATO air strikes targeted the port of the Libyan capital.
STORY HIGHLIGHTS

"All NATO's targets are military in nature and are directly linked to the Gadhafi regime's systematic attacks on the Libyan people," said Rear Adm. Russell Harding, deputy commander of Operation Unified Protector. "Given the escalating use of naval assets, NATO had no choice but to take decisive action to protect the civilian population of Libya and NATO forces at sea."

In a statement, NATO said the attack occurred after two weeks of escalating use of government maritime forces that had disrupted the flow of humanitarian assistance.

All the vessels targeted were naval warships with no civilian utility, said Harding.

But a Libyan official who led CNN personnel on a tour of the area said the commercial port, not the nearby military port, was hit. From the distance at which CNN was allowed to view the area, it was not clear what sort of vessels were hit.

The port's general manager, Mohammed Ahmed Rashed, told reporters that six rockets struck in three strikes that hit five coast guard boats and one navy vessel, which had been in dock for maintenance. The port remained operational, he said.

Libyan government spokesman Moussa Ibrahim called the attack a "clear attempt to bring the nation to its knees," and said the port serves as the main entry point for food and other critical supplies into the country. "The nation will starve," he said.

Still, though the port was in disarray, the damage did not appear major, he said.

Ibrahim's claims came as President Barack Obama, addressing a global audience, condemned the use of force against Arab Spring protesters by longtime allies and adversaries alike.

He added, "It's not Obama who decides whether Moammar Gadhafi leaves Libya or not. It's the Libyan people who decide their future."

The report of the attack came shortly after at least three explosions could be heard in the city.

A government official said five airstrikes had targeted the port and the police academy was also hit on Thursday, during which NATO jets could be seen been flying overhead throughout the day.

Libyan state-run television reported the strikes with a "breaking news" font that said, "Military source: Residential and military locations in Tripoli are currently being shelled by NATO forces."

Earlier Thursday, crowds of Libyans took to the streets of Tripoli, honking horns and dancing in the streets in support of the country's leader, Moammar Gadhafi.

More than 100 people outside the headquarters of state television chanted "God, Moammar and Libya only" and other pro-Gadhafi and anti-rebel slogans.

The demonstrations were sparked, apparently, in response to state-run television reports that parts of the rebel capital Benghazi were "rejecting the colonialists and their followers," as the government describes NATO and the rebels.

A group of journalists, including a CNN team, was taken by government minders to see the celebrations in Tripoli.

Among the crowds composed predominantly of young men were a number of families -- including fathers carrying children on their shoulders.

One woman, who brought her 10-year-old-daughter, carried a portrait of the Libyan leader and said they were celebrating their country being united again.

Many then drove toward Tripoli's Green Square singing and honking their horns, waving Libya's green flag and portraits of Gadhafi.

But CNN journalists in Benghazi saw no indications of counter-revolutionary uprisings or protests there. And the National Transitional Council denied government claims that pro-Gadhafi forces had seized control of the city.

And residents of Benghazi said they had not seen or heard of pro-Gadhafi rallies there.

Two months ago, Gadhafi loyalists in Tripoli erupted in similar cheers when state media incorrectly reported that Tobruk and Benghazi had fallen to government troops.

Gadhafi has been fighting to keep control of his country in the face of an uprising that has led to a number of key cities falling into rebel control.

The chief prosecutor of the International Criminal Court this week requested a warrant for Gadhafi's arrest on charges of crimes against humanity.

CNN's Ben Wedeman and Jomana Karadsheh contributed to this report.