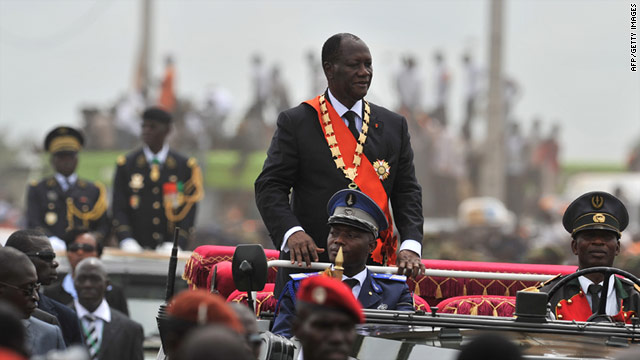 (CNN) -- Alassane Ouattara was inaugurated Saturday as president of troubled Ivory Coast in a ceremony that marked a symbolic end to months of political turmoil.

In his speech, Ouattara recognized the 20 heads of state who were present at the ceremony in the capital, Yamoussoukro, mentioning French President Nicholas Sarkozy first. He then called for a moment of silence to remember compatriots killed in the bloodshed that followed the disputed November election.

Ouattara had already been sworn in but Saturday's event was a formal start to a presidency challenged by myriad issues plaguing Ivory Coast. Ouattara's administration faces a huge task of reuniting a divided country, human rights groups have said.

In the months after the November vote, spiraling violence between forces loyal to both sides left hundreds dead, and cases of enforced disappearances and sexual violence were reported.

Human rights investigators said this month that they have found a total of 10 mass graves near the commercial capital of Abidjan.

In a letter sent to Ouattara before his inauguration, Human Rights Watch urged the new president to hold perpetrators of past atrocities accountable

The global monitoring group called on the president to address the communal divisions through a truth-telling mechanism, ensure discipline among security forces and establish an independent judiciary.

"President Ouattara will be sworn in as head of a deeply fractured nation still reeling from the horrors of recent months," said Corinne Dufka, senior West Africa researcher at Human Rights Watch. "He should waste no time in moving (Ivory Coast) out of this dark period through justice that is blind to political affiliation or rank."

One of his main challenges will be reconciliation among citizens, according to a humanitarian worker in Abidjan.

It will be critical for the new government to avoid reprisals between different ethnic and tribal groups, between political foes and between victims and perpetrators of murder and other atrocities, said Stephen Wallace, director of the international aid organization CARE in Ivory Coast.

CARE has established a "listening center" at a camp for displaced people and hopes to open many more.

It's a place where traumatized people can go to work through what they saw and what they feel. It's a good way to prevent acts of vengeance, Wallace said.

Ouattara has urged the International Criminal Court to investigate "the most serious crimes committed" after the presidential vote.