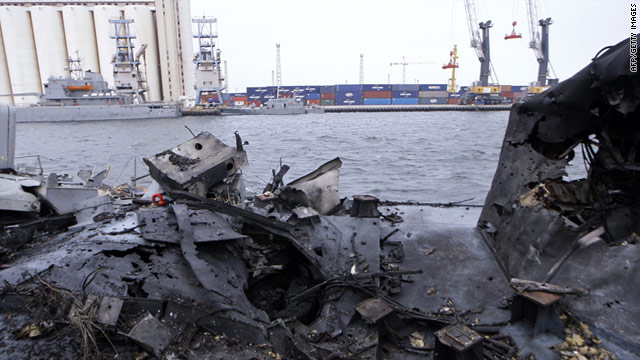 Picture shows damages at the port of Tripoli on May 20 after NATO warplanes hit eight vessels.
STORY HIGHLIGHTS

Tripoli, Libya (CNN) -- Libyan officials sounded an alarm Saturday over NATO bombings of three ports that they said would trigger a crisis by limiting the movement of supply ships carrying critical supplies in and out of the war-torn nation.

No deaths or injuries were reported.

Bracken said at a Friday news conference that the NATO strikes were justified.

Gadhafi was indiscriminately mining waters in Misrata and hampering the flow of humanitarian aid, Bracken said.

"He was using maritime forces to lay mines. These were legal targets," he said.

NATO and human rights groups said Libyan forces have targeted aid ships coming in and out of Misrata, where a bloody see-saw battle has raged between Gadhafi's forces and the rebels.

But the coast guard commandant denied that his vessels were used to attack Misrata or any other Libyan city.

A Libyan official who led CNN personnel on a tour of the area Friday said the commercial port, not the nearby military port, was hit. From the distance at which CNN was allowed to view the area, it was not clear what sort of vessels were hit.

The port remained operational, according to officials, but the strikes would impact the limited movement of supply ships.

Libyan officials said the port is the main food and fuel supply line, and they expect the strikes to deter freight ships from coming because of security concerns and to increase the insurance on ships and goods.

In another development, the European Union will open an office in Benghazi on Sunday, officials said.

Catherine Ashton, foreign policy chief of the European Union, will open the office, said the National Transitional Council, which is based in the city.

The council, in a statement, quoted Ashton as saying, "It will be an honor to meet the people who have been fighting for democracy and a better future for Libya. I plan to meet key people from the National Transitional Council, civil society groups and our international partners, and will report back to EU Foreign Ministers on Monday. Opening an EU office is an important signal of our unfaltering support for the Libyan people. It is the EU putting words into action."

Also Saturday, Libyan rebels released four French nationals detained in Benghazi since May 11. The four traveled to Egypt on Saturday, where they were taken in by French consular authorities, the French Foreign Ministry said.

And in western Libya, a government bus carrying three foreigners working for international media organizations -- Phoenix TV, BBC and Reuters -- was attacked by an angry mob in Zawiya. The journalists were on their way to the Tunisian border.

Yijun Zhou, a reporter for Hong Kong-based Phoenix TV, said an angry crowd of dozens surrounded the bus and a man with a knife slashed the tires of the bus, kicked in the doors and climbed aboard followed by five more men.

Reuters producer Guy Desmond, who was also on the bus, said at least two of the attackers had pistols and one had a knife.

They shouted at the journalists, demanding to know their nationalities and employers.The journalists were taken to a police station for two hours before they returned to Tripoli to get another bus back to the border.

Meanwhile, pro-Gadhafi forces have unleashed their biggest attack yet against a rebel stronghold in the mountains of western Libya, one of the Libyan leader's former generals said.

As of Friday night, one rebel was dead and three were wounded, one of them critically, the former commander said. He now commands rebels in Zintan, using the name Hajj Usama.

The attack began Thursday when about 150 of Gadhafi's infantry troops began firing on three fronts near Zintan, about 90 miles southwest of the capital, Tripoli.

In response, Usama said he dispatched hundreds of fighters to cut off Gadhafi's advance.