Facing the unknown in Tunisia 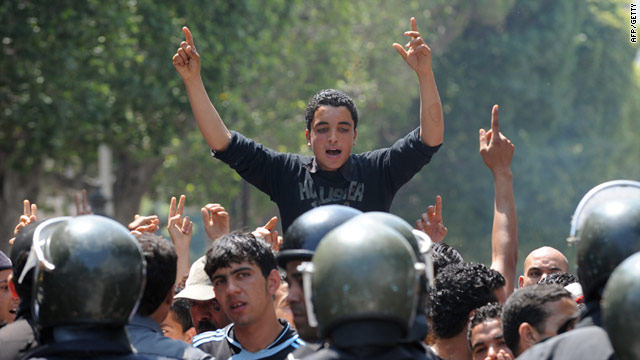 Tunisian riot police face protesters in Tunis on May 6 during a youth protest against the transitional government.
STORY HIGHLIGHTS

(CNN) -- President Barack Obama recently spoke of the December day a young Tunisian street vendor named Mohammed Bouazizi set himself on fire, in an act of hopelessness -- and purpose. His act sparked the Arab revolutions.

"We have embraced the chance to show that America values the dignity of the street vendor in Tunisia more than the raw power of the dictator," Obama said in his recent speech on the Mideast.

Now that President Zine El Abidine Ben Ali is gone, Tunisia is on the brink of becoming the first Arab democracy forged by a grass-roots revolution. And a deadline is looming: Elections are slated for July 24.

It's been a weary few months, marked with strikes and demonstrations, and big questions: How will Tunisia's version of democracy play out? What role will Islam play?

As the date gets closer, almost everybody's anxious and on edge.

"I think in the first weeks everybody was optimistic and happy. But now, everybody's exhausted," said Hatem Mahbouli, who is studying for a master's degree in business at Georgetown University.

They're exhausted because they don't know what's coming. This secular, educated society has few organized political parties to steer the country in a democracy.

One of the few organized bases is al-Nahda, the largest Islamic party. Much of the nervousness is over what role Islam will play in Tunisia.

Those nerves spilled over into a recent debate hosted by the Center for the Study of Islam and Democracy in Washington.

The big draw was Hamadi Jebali, the secretary general of al-Nahda.

Jebali spent nearly two decades in prison for being a member of al-Nahda under the old dictatorship. Al-Nahda means renaissance -- and it is having one. The party is expected to emerge from Tunisia's first elections with real power.

So Tunisians in this secular society are listening very carefully to what al-Nahda's leaders say -- and what they do not say.

Tunisia PM looks to future, not past
RELATED TOPICS

Jebali wore wire-rim glasses, a suit, and a soft smile. His speech was filled with the lush language of democratic principles: Equality. Dignity. Diversity.

"The Tunisian revolution shows a peaceful democratic way to address the needs of the country," he told the audience of several dozen. "And that peaceful and democratic change works and gives hope to the whole region. It is possible to build development with justice, dignity, and stability without violence and without wars."

Then it was Nabila Hamza's turn to talk. She heads the pro-democracy group called Foundation for the Future. She knows al-Nahda was brutally repressed for decades and said she was glad to see al-Nahda having a real renaissance. Still, she brought a respectful and unwavering critique.

"And we as women are worried about this double discourse."

Hamza spoke of the recent demonstrations in Tunisia by hard-line Islamists against unveiled women and against theatre groups and actors. She said people want to know -- where does the Islamic party stand?

The two speakers sat maybe 8 inches from one another. And in the space and the words between them, you could sense the pulse of Tunisia: questioning, hopeful, and anxious -- emotions that bubble up in the face of the unknown.

Hamza said she's glad to hear the words of equality and freedom by al-Nahda as it campaigns for votes.

"But many people think that al-Nahda is maintaining this just to go to the power -- and then it will be something else."

Alfred Stepan of Columbia University said recently that he is hopeful for Tunisia. Stepan was there in March and met with al-Nahda leader Rachid Ghannouchi for more than an hour.

Stepan said Ghannouchi told him he had agreed with some secular parties to preserve the existing family code in Tunisia -- the strongest in terms of womens' rights in the Arab world.

"He told me, 'Maybe I wouldn't have written it, but I'm not going to change it,'" Stephan said. "So I think they're going to engage in the political system, and they know there are costs if you break your word and don't engage in democratic procedures."

Feriel Bonhafa hopes that is the case. Her family lives in Tunis. She's earning a doctorate in Islamic studies at Georgetown University.

She came to hear Jebali speak -- and she asked him where the Islamic party will stand if the elected leaders of Tunisia choose to follow Sharia law. How will they square that with their dedication to universal rights and human rights?

"Where do you draw the line?" she asked. "What takes precedence in a case of conflict?" She envisioned a conflict like selling alcohol, or preserving equal inheritance rights for women.

Jebali didn't answer her question directly. He did say several times that religion is a private affair and the government should be neutral.

Mahbouli, the Georgetown graduate student, wanted to talk about where al-Nahda stood with the hard-line Islamists who belong to the party.

At the debate, Mahbouli asked Jebali about a meeting of al-Nahda in Tunisia in April.

He said al-Nahda had invited a hard-line Islamist singer to one of its political meetings.

"And he was insulting Tunisian artists. He literally said, if I had a Kalashnikov, I would kill this (secular) filmmaker. And everybody was applauding."

He wanted Jebali to answer this question: "Why don't you guys take serious measures to fill the gap between what you say and what you might do in your meetings, or what I see on Facebook from your supporters? Because there is a huge gap."

At the debate, Jebali said again and again that hard-line Islamists do not represent al-Nahda. He said the answer to dealing with extremists is not repression, but openness.

Mahbouli said the jokes back home reflect the anxiety -- jokes like "This may be the last summer where we can have a beer together. Or to go swimming."

Those jokes are likely to keep ratcheting up -- until July 24.