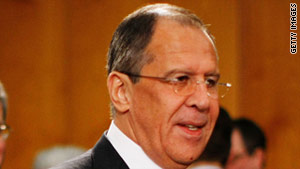 Moscow (CNN) -- The Libyan opposition is not asking to be recognized as the "sole legitimate" authority in the country, Russian Foreign Minister Sergey Lavrov said Tuesday, a day after meeting with opposition representative Abdel Rahman Shalgam.

Instead, he said, Shalgam asked only that the National Transitional Council, based in Benghazi, Libya, be considered "as a legitimate partner in the talks" aimed at settling the nation's conflict, Lavrov said.

Opposition officials are aware, Lavrov said, that the settlement talks should also involve other parties, including representatives of Tripoli and western regions of Libya.

Lavrov said he hopes a crisis settlement plan for Libya can be formulated at an upcoming session of the African Union.

"I hope that some strategy will be worked out based on all of these approaches" -- referring to ones offered by opposition representatives in Benghazi, the African Union and the United Nations -- "that will help end this bloodshed as soon as possible," he said.

Speaking to reporters after his meeting with Lavrov, Shalgam said Monday that the Libyan opposition would like to continue dialog with the Russian authorities "because Russia is a very important state and a permanent member of the U.N. Security Council."

"We have agreed to remain in contact over the situation in Libya," he said.

Shalgam reiterated that the Libyan opposition is not going to strike any reconciliation deal with the country's ruling government, and insisted on the immediate resignation of leader Moammar Gadhafi.

"We will have peace and no gunfire when Gadhafi relinquishes power or leaves the country," he said.

Shalgam also said the Libyan opposition does not want NATO to conduct a ground operation in Libya.