By Columbus Mavhunga, For CNN 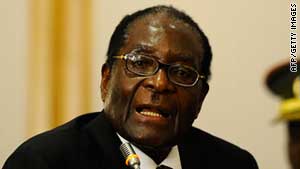 The six men were accused of plotting to topple Robert Mugabe and replace him with Zimbabwe's defense minister.
STORY HIGHLIGHTS
RELATED TOPICS

The alleged coup plotters have been in prison since 2007, despite several attempts by their lawyers to have them released. Treason carries a death sentence in Zimbabwe.

After reading a seven-page ruling, Justice Yunus Omerjee said it was apparent that the defendants should not have been commuted to custody and he said a declaratory order will be issued to that effect. Justice Joseph Musakwa concurred.

In July, the High Court dismissed the case because the alleged coup plotters had not been brought to court for trial within six months, as required by law. State prosecutors responded by re-indicting them. The defendants appealed to the High Court to throw out the re-indictment.

The man accused of being the ringleader of the alleged coup plot, Albert Matapo, was arrested in 2007, as were six other suspects: Nyasha Zivuku, Oncemore Mazivahona, Emmanuel Marara, Patson Mupfure, Shingirai Mutemachani and Rangarirai Maziofa. They were accused of plotting to violently topple Mugabe and replace him with the country's defense minister, Emerson Mnangagwa. The suspects denied the allegations against them, and one was later released.

Their attorneys said if the state wished to pursue the matter, their clients would not be detained. It was not immediately clear what action the state would take.