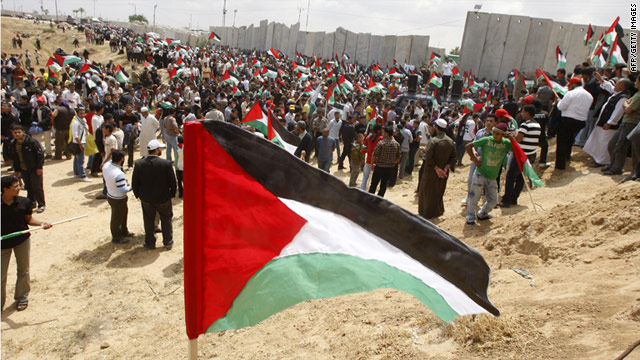 Palestinians hold up their flag as they rally along the Rafah border.
STORY HIGHLIGHTS

Cairo (CNN) -- Egypt will permanently open its Rafah border crossing into Gaza beginning Saturday, an Egyptian official reported Wednesday. The move provides Gazans with an open door to the outside world for the first time in four years.

"The Egyptian government decided to open the Rafah border to (give) relief (to) the people of Gaza permanently," said Ambassador Menha Bakhoum, head of media and public diplomacy for the Egyptian Foreign Ministry. The crossing officially will remain open daily from 9 a.m. to 5 p.m. except on Friday and public holidays.

All the country's security apparatus will be involved in the security of the border, he said.

Rafah Crossing has been a portal to the rest of the world for Gaza's 1.5 million Palestinian residents since Israel "closed Gaza's air space and territorial waters and all but closed Erez Crossing to Palestinians" four years ago, said the Israeli non-governmental organization Gisha, which advocates on the issue of Palestinian freedom of movement.

Erez Crossing is on the border between Gaza and Israel. Passage through it has been limited to "extraordinary humanitarian cases, especially urgent medical cases," which has prevented Palestinians from traveling between Gaza and the West Bank, the group says.

Rafah was closed after the Israeli soldier Gilad Shalit was captured in June 2006; it stayed largely closed until last June, when Egypt opened it after an incident in which nine activists aboard a flotilla of ships carrying aid to Gaza were killed, according to Gisha. From then until January, an average of 19,000 people per month have crossed Rafah in both directions, nearly half the rate during the first half of 2006, it added.

At present, foreigners, visa holders and people seeking medical attention or study in Egypt can cross through Rafah, it said. Among Palestinians, only those who are listed in the Israeli-controlled population registry can cross, it said.

There was no immediate reaction from Israeli government officials. But on Tuesday, prior to the announcement, Israeli Prime Minister Benjamin Netanyahu criticized Hamas in an interview with Fox News.

"They are putting into Gaza about 10,000 rockets, which they fire on us," he said. "They've already fired 6,000 rockets on us. They are amassing more. So, they are not a partner for peace."

The opening marks a change for Egypt's government, which had hewed closely to Israeli interests under President Hosni Mubarak, who was deposed in February.